Bishop Noel Treanor, Bishop of Down and Connor, has been elected as Vice President of COMECE (Commission of Bishops’ Conferences of the European Community).

At the 2018 Spring Assembly held in Brussels, the bishop was one of four Vice Presidents elected to COMECE which is made up of Bishop delegates from Catholic Bishops’ Conferences of the 28 Member States of the European Union (EU).

Archbishop of Luxembourg, Jean-Claude Hollerich SJ, was elected as the new President of COMECE. Speaking after his election, Archbishop Hollerich said he is ‘ready to work together with all persons of good will who are dedicated to respect and protect human dignity’. He confirmed the commitment of COMECE to put the human person and the common good at the centre of EU policies. 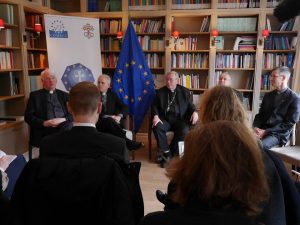 The four Vice-Presidents who were elected are Bishop Noel Treanor (Ireland), Bishop Mariano Crociata (Italy), Bishop Jan Vokal (Czech Republic), and Bishop Franz-Josef Overbeck (Germany). Each is expected to serve a five-year term from 2018 to 2023.

Bishop Treanor previously served as Secretary General of COMECE from 1993 to 2008, before his ordination as Bishop of Down and Connor. He has been a member of COMECE since 2009 and has addressed COMECE on the issue of Brexit, and how it might affect Ireland.

In 2017 Bishop Treanor spoke on the occasion of the 60th anniversary of the Treaty of Rome (See CI Nnews 26 March 2017). He said, “There is no doubt that the journey has been difficult and we continue to face many challenges across Europe and within our own country. Surely, the legacy of the Treaty of Rome is to be found in continuing the work begun by previous generations who courageously and prophetically sought to establish a better future for all.”

To mark the start of the new Presidency of COMECE, a Mass for Europe was celebrated at the Church of Notre-Dame du Sablon, Brussels, on 8th March. Cardinal Marx, Archbishop of Munich and Freising and former President of COMECE, was the chief celebrant at the Mass. In a statement Cardinal Marx said of his successor Archbishop Jean-Claude Hollerich: “I wish he will make a contribution for this vocation of the Church in Europe.”

Cardinal Reinhard Marx was president of COMECE for two terms and was behind the (Re)Thinking Europe Dialogue. This involved a conference in October 2017 aimed at promoting dialogue between 350 participants, from 28 delegations of every EU country, including high-level EU politicians, cardinals, bishops, priests, ambassadors, academics, representatives of diverse Catholic organisations and movements, and from other Christian denominations. Pope Francis addressed the delegates in the concluding days of the conference stating: “favouring dialogue, in any form whatsoever, is a fundamental responsibility of politics” 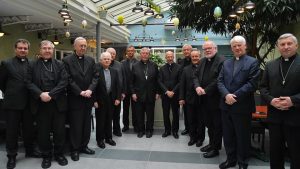 The new President, Archbishop Hollerich, is expected to build on the success of (Re)thinking Europe, to continue strengthening the Dialogue between the EU institutions and the Catholic Church on the basis of *Article 17 TFEU.

One event associated with this was held on 6th December 2017 when COMECE participated in “The External Policies of the EU”, an event co-organised with the European Parliament as part of the dialogue between the EU institutions and representatives of Churches and religious associations and communities. The event focused on the positive contribution that Churches and Church actors can bring to the development of a more coherent EU external policy based on the rule of law and on the respect of human dignity.

*Article 17 of the Treaty on the Functioning of the European Union (TFEU), allows for European institutions to hold high-level meetings, or working dialogue seminars, on an annual basis with churches and non-confessional and philosophical organisations. This dialogue, focused on issues upon the European agenda, can be traced back to earlier initiatives, such as that launched in 1994 by Jacques Delors – ‘A Soul for Europe’ – which opened the way to encompass ethical and spiritual aspects of European integration.