Home > Featured > Bishop and President of Maynooth concerned by racism

Bishop and President of Maynooth concerned by racism 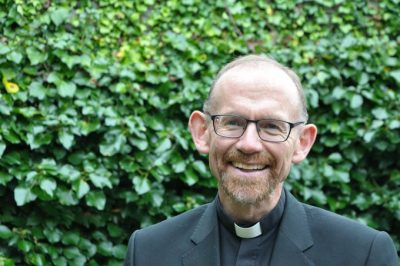 The issue of immigrants, refugees and those seeking asylum has “polarised many communities in our land” the Bishop of Killaloe has warned.

In his Christmas greetings message, Bishop Fintan Monahan said Christmas is “an opportune time to become aware of those less fortunate than ourselves”.

“It is a time when we can reach out to others with care, concern, compassion – with Christian love. By its very nature the good news of the birth of our Saviour demands a voice and clamours to be shared and passed on!”

He appealed to people to remember those who “might not have the same privileges and resources that many of us have” and regretted that homelessness continues to be major problem in Ireland and in the wider world.

Acknowledging that immigrants, refugees and those seeking asylum are an issue which has become very topical in recent months, Dr Monahan said that unfortunately it has “polarised many communities in our land”.

He said it was heartening to hear of the arrival of a substantial number of seekers of asylum to our capital town and added that his hope and prayer is that “they will be welcomed with open arms”.

“We remember at this time of the year the Holy Family in their struggle to find a resting place both in their own land and in their travels abroad.”

He said that at this time of the year people who are away from home are also in our thoughts.  “We welcome home those who have returned to be with us for the holiday season and our prayers go out to those who could not come home. Welcome also to anyone who has come to join us from other countries and enrich our work-force and culture and communities by settling in our midst.”

Describing Christmas as a time when many people look towards the Church and faith for a message of hope, meaning and inspiration, he said that for many, Christmas is a time of memories, recollection and nostalgia.

The festive season is a good time to look back at the events and happenings of the year just gone by and reflect on what has been.

Bishop Monahan commended the “diligent efforts” of many in public life, the charity sector and every concerned person of good will in their efforts to alleviate and fight the scourge of poverty.

On the issue of care for the earth, he said great strides have been achieved in the past year in relation to “awareness of the gift of creation around us, with the recent Amazon Synod in Rome and the worldwide protests of inspirational young people, concerned and caring for the planet earth.”

He expressed the hope that people would always have a “Franciscan-like” love for the gifts and fruits of the earth and ensure its protection for future generations.

In his message, the Bishop of Killaloe also remembered those who have suffered a loss or bereavement and said Christmas can be a particularly challenging time for them.

“Our thoughts and prayers go also to the many people who have lost their lives as a result of tragedies on our roads, on our waterways, those who for whatever difficult circumstances in life and their own personal lives have taken their own lives, and most of all their families who are left bereft, forlorn and heartbroken.”

The incarnation, Bishop Monahan said, came through the presence of “a tiny vulnerable baby that had such potential and became such good news for the human race”.

“In a country in which the protection of such individuals has reduced greatly in recent years, we pray for a deep sense of respect for all forms of life from beginning to end.”

Separately, the President of St Patrick’s College Maynooth noted how there has been a heightened awareness recently of the arrival to Ireland of migrants, refugees and asylum seekers, “knocking on our door in search of protection, security and a better future”.

In his homily at the annual Christmas carols concert in Maynooth, Fr Michael Mullaney said they were “People who have lost or given everything, in some cases even their lives, in a desperate attempt to escape the devastating effects of climate change, war, persecution and poverty.”

He continued, “We have been horrified by the harrowing stories of migrants found hiding and, more shockingly, dead in truck containers – modern coffin ships. We are wrestling with the complex issues around housing and integrating migrants in asylum centres.”

“More worrying is the emerging fear of ‘the other’, the foreigner, the stranger. To some extent, the fear is legitimate because the preparation for this encounter is lacking. Some parish communities’ traditional tranquillity seem to be threatened. The problem is not that we have doubts and fears, but when they condition our way of thinking and acting to the point of making us intolerant, closed and perhaps – without realising it – even racist.”

He acknowledged that most people would balk at the idea that they are racist because they understand racism on an individual rather than structural level.

“Many of us can point to friends of different colour, religion, ethnic group and believe we are open, unbiased and tolerant to the ‘other’. However, a recent EU Report highlighted worrying patterns of racist behaviour in Ireland.”

Figures of harassment, discrimination and racism were significantly higher in Ireland than in many other European countries.

“A new language of racism, mostly opportunistic, understated, but no less toxic, has emerged in our public and political discourse, stoking hostility towards the ‘other’ and testing our own sense of hospitality for the first time,” Fr Mullaney warned.

“Ultimately, none of us can escape bearing a resemblance, warts and all, to the sense of cultural and economic entitlement and privilege, even superiority, that raises and forms us in the western world, including Ireland,” he added that it takes a lot of critical thinking and intentional unlearning to change that.

Recalling Jesus’ encounter in the Syro-Phoenician woman desperately seeking a cure for her sick daughter, he noted that the disciples and Jesus were dismissive of her because she was considered racially inferior.

But the Syro-Phoenician woman dislocates Jesus from his narrow tribal suppositions and prejudices about the ‘other’ represented by her.

“She ceases to be an ‘outsider’. God’s heart could not be closed to her. She too is one of the children of God. Physical healing is given not only to her daughter, but ultimately the deeper wounds of isolation, marginalisation and discrimination become central to Jesus’ healing and liberating ministry in the Gospel.”

Fr Mullaney explained that, “In this transformative encounter Jesus demonstrates that regardless of how unwittingly and unknowingly we are part of the problem, we can choose to reject racism and hostility to the ‘other’, the stranger, in ourselves and in our world, committing ourselves to the slow, hard work of transformation.”

He explained that the season of Advent that prepares for the Nativity of the Lord comes from the Latin word ‘advenae’ which means the ‘one who comes’, the ‘other who comes’, the stranger, the foreigner who comes to our threshold unexpectedly.