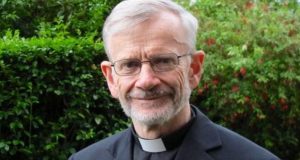 Bishop Alan McGuckian of Raphoe has asked the Gardaí to investigate “allegations of cover-up and collusion” which were made in a TG4 documentary last week on child sexual abuse in Donegal.

The documentary, Bishop McGuckian said, “revisited the pain and tragedy of child sexual abuse committed by clergy and others in the Diocese of Raphoe”.

“What happened is a source of revulsion and shame for all associated with the Diocese,” he stated.

The documentary ‘Finné’, which was broadcast last Wednesday night, focused on the abuse of children by Fr Eugene Greene and Denis McGinley, a former teacher, in north west Donegal.

Accounts of the abuse were given by Martin Gallagher and former investigating Detective Garda, Martin Ridge.

The documentary alleged that there had been collusion and cover-up involving members of the Diocese both living and dead.

In a statement posted on the diocesan website, Bishop McGuckian stated, “I immediately contacted the Gardaí asking them to investigate these allegations and will meet with them in the near future and offer them every possible cooperation in any investigation to ascertain the truth.”

In the documentary reference was also made to a ‘Forensic Cold Case Investigation’.

Dr McGuckian said the Diocese “supports and will give full cooperation to any effort to cast as much light as possible on this sad and tragic part of our history as a diocese and county”.

He added that the form of any investigation would be a matter for the statutory authorities.

But he stressed that any information which the Diocese of Raphoe holds in relation to the abuse of children “is completely available to the Gardai and the diocese is ready at all times to cooperate fully with any enquiries”.

Reacting to the documentary, the Bishop of Raphoe said it reminded him that the betrayal of trust felt, especially by the victims, but also by many others is so serious as to be “almost irreparable”.

However, he underlined that if it was a support to anyone to contact the diocese, he invited those who carry the pain of abuse to come forward and speak either to the bishop himself or the Designated Liaison Person.

The Designated Liaison Person in Raphoe, Margaret Northage, can be contacted at: 086 2183011.