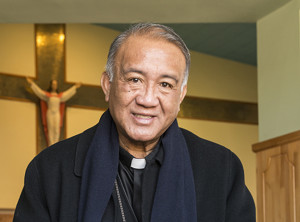 Bishop Wenceslao ‘Wens’ Padilla is the only bishop in Mongolia for the Church, which was opened a little more than twenty years ago following the fall of communism.

Bishop Padilla, who will give the homily at Masses at Westminster Cathedral next weekend (18 October) said, “Although I’ve seen many Mongolians come to know Christ, there are still so many more that need to be reached. I want to continue reaching out to the poor and am grateful for the love and support of our sisters and brothers in England and Wales.”

As a priest, Bishop Padilla, a Filipino from the Italian Congregation of the Immaculate Heart of Mary, and two fellow missionary priests, arrived in Mongolia in 1992.

They started their mission from an hotel room and by celebrating Mass with expatriates and soon their Mongolian friends joined them.

Initially the Bishop looked to the needs of the people, for example the many groups of nomadic herders, communities struggling with alcoholism, and family problems and issues associated with poverty.

There were very few Government supports or social services.

So the Bishop and his colleagues set up a care centre for homeless children, and they got involved in building schools, and medical centres as well as centres for work skills.

“All cater to the very poor,” said Bishop Padilla, “those that have no clothes to wear, no food, no family.”

The Church in Mongolia gives witness to God’s love by continuing to offer these and many more services, as well as supporting its growing community of Catholics.

The Bishop has been invited to London to highlight this work by Missio, the Pope’s official charity for overseas mission, which helped build the first Catholic Church in Mongolia.

“World Mission Sunday is an opportunity for the family of the Church to support its youngest member, the Church of Mongolia,” said Mgr Canon James Cronin, National Director of Missio in England and Wales.

Missio raises funds to support the Church where it is too young or too poor to support itself. So there will be collections in parishes across England and Wales and funds raised will support the work of missionaries, like Bishop Wens, all around the world.

The Catholic Church is not the only Church in Mongolia. Since the collapse of the communist regime in 1990, the number of Christians has steadily increased.

Mongolia has featured in American papers because of the rapid increase in new members to a variety of Churches, not least the evangelical American churches.

Slightly more than half of Mongolia’s population is Buddhist, and most of the remainder is non-religious. Islam, shamanism, and Christianity are minorities. 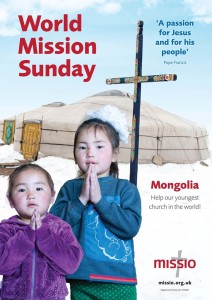 In a Catholic News Agency report in May 2014, Bishop Padilla stated that Mongolia is in transition with people moving from a nomadic to settled lifestyles and there is a growing materialism with many turning away from the faith.

On the other hand, since the end of communist rule people have been more open to the faith.

Last year, the Church had 20 priests, two monks, and 49 nuns from 12 religious congregations working in Mongolia.

A positive sign for the future is that there are two indigenous Mongolians nearly finished their studies for the priesthood.