Home > News > Theology should be done at coal face of experience

Theology should be done at coal face of experience 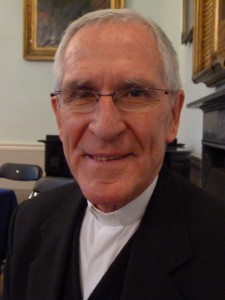 In his recent address to the AGM of the Conference of Religious of Ireland, Bishop Kevin Dowling of Rustenburg in South Africa said he will personally be disappointed if there is not a strong emphasis in October’s Synod on the Family in Rome on the Church reaching out in meaningful ways to all the “hurting” and “struggling” couples, marriages and families.

He told the assembled Religious priests, Sisters and Brothers in Dublin that to restate and reaffirm traditional ideals for marriage is the easy part.

“Theology today should, in my view, be ‘done’ more and more at the coal face of human experience, especially that of suffering and degradation – that must be theology’s privileged ‘locus’,” he said.

In his address entitled, ‘Revisioning Religious life for the 21st century in a global context’, the Redemptorist bishop said the recovery of the spiritual dimension in all of life and the essential interconnectedness of everything in the cosmos, which is at the heart of the spirituality which many perhaps yearn for, and which is also part of the prophetic witness and experience religious should be able offer to each other and others, especially the poor and marginalised of the world, and as part of our conscious stewardship of our planet.

Referring to the inevitable phenomenon of institutionalisation of religious movements over time, he said the issue for Religious today is “can we revision and live authentically the essentially prophetic nature of our calling in the religious life, and how do we do so in our context?”

He recalled that the mystic Julian of Norwich tells us we are not just made by God; we are made of God while Meister Eckart imagined us as God’s seed and that God’s seed must grow into God.

“This points very clearly to the call that contemplation and discernment must infuse the prophetic ministry options we take if those options are to breathe with the Spirit and power of God to transform,” Bishop Dowling suggested.

He said this was an invitation to Religious to recover the spiritual dimension of life, especially in an increasingly secularised world, but in ways which make sense to people in a framework of respectful dialogue with them.

Over the past years there had been a moving away from a primarily Eurocentric Church with all that implies, to a global and multi-cultural Church with diverse expressions of faith-life.

There can be many other cultural values of great worth and many different experiences and expressions of faith and spirituality, he suggested.

This provides a meaning for life and a challenge not only for Religious Institutes and each Religious as an individual in the modern world, but also in terms of outreach in ministry to other groupings, and spiritual or religious or faith traditions in society and the world.

Referring to the writing of Professor Celia Kourie of the University of South Africa who has identified the phenomenon of constructive post-modernism and the values it proclaims as an emphasis on the inter-connectedness of all of life, human and non-human”, he said she holds that this “has great significance for present-day spirituality” and is one of the factors contributing to an interest in the subject.

“There is no attempt to eliminate (the death of God etc), but rather to revise modern premises and traditional concepts”.

In this regard, a too dogmatic or authoritarian approach by the institutional Church, especially with its strict control of theology in view of what it defines as orthodoxy, can also lead to a dislocation of theology and spirituality.

The systems of theology should not only be focused inwards on the coherence and logic of doctrines which can be rationally demonstrated in the hothouse of philosophical and theological constructs.

A theology should be a living expression of a spirituality, there should be a dynamic relationship between the two so that a growth in theological understanding of God should necessarily lead to creating and sustaining an experience of the closeness of the love-filled God to all humankind and its deepest desires, and to all the issues relating to the human and planetary condition.

He suggested that theology today should be ‘done’ more and more at the coal face of human experience, especially that of suffering and degradation.

He said he too wanted to sincerely thank and express his appreciation in the same way towards Irish missionaries.

“They planted seeds which are developing in ways those women and men of faith may not have foreseen at the time,” he said.

Bishop Dowling recalled that when he served on the Redemptorist General Council he paid a visit to the Philippines in 1986 and did a visitation with the Redemptorist Superior General to the same country over a period of six weeks in 1988, travelling from north to south.

“I met the Columbans and Redemptorists from Ireland, for example on the island of Negros where they served with their great prophetic Bishop Fortich whom I was privileged to meet – indeed a dangerous ministry in the midst of widespread oppression by the military.”

He also revealed that he has six Irish SMA priests ministering in his diocese, one Irish De La Salle Brother, and two Irish Sisters of Charity of St Paul.

“And organisations like Trócaire and Misean Cara give such a relevant and inspiring support in all they do through partnerships with local people, communities and organisations which bring hope and new life in so many countries,” he said.

He also referred to Misean Cara’s outgoing chairperson, Matt Moran, who said at his organisation’s AGM, “Local and indigenous missionaries are continuing the development work initiated, and carried out for many decades by Irish missionaries in poor countries in the global south.”

“Missionary development is an integral part of Ireland’s overseas aid programme, and is recognised for its holistic approach and how it reaches into remote areas where other agencies generally do not operate. Apart from providing essential services in education and health, missionaries enable the poor and marginalised to advocate for their rights and to seek social justice.”