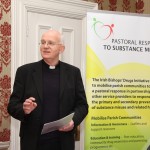 Bishop Éamonn Walsh has described the devastation caused by drugs and alcohol as a blight on our society that the Catholic Church in Ireland has challenged for generations.

In welcoming a Vatican message marking the UN International Day Against Drug Abuse, Bishop Walsh of the Irish Bishops’ Drugs Initiative (IBDI) highlighted the work of Irish organisations such as the temperance movement of the 19th century led by the Capuchin priest Father Theobald Mathew, and the work over the last fifty years by Sister Consilio and the Cuan Mhuire residential treatment centres for people with addiction.

“The Church has sought to alleviate the incalculable suffering and damage caused by drugs and alcohol to individuals and their families,” he said.

The IBDI has helped many parishes work towards preventing drug use. The latest programme – ‘Leave your mark’ – will train transition year (TY) students (aged around 16) in facilitation and drug awareness skills so that they in turn can educate parents of younger students.

The IBDI has been in operation for 20 years now, and one of its more recent pilot programmes is ‘the Commitment’ for Confirmation class students, some of whom also take the Pledge to abstain from alcohol and other drugs.

TY students visit these young people in schools or parishes ranging from Abbeyfeale and Tuam to Waterford. They facilitate the programme and tell of their experiences of abstaining from alcohol and drugs or what they call the commitment to ‘lead a healthy lifestyle’. They also discuss what will face the sixth class students when they go into first year and help prepare them for secondary school by allaying their fears around various issues such as bullying.

“The Commitment is for parishes to use, not in place of the Pledge, but as a support to it and to modernise and change it and put a different slant on it,” said Darren Butler, National Coordinator, Pastoral Response to Substance Misuse, IBDI.

He explained that those who want can take the Pledge, but everyone can make a commitment to lead a healthy lifestyle.

“So there is no reason for anyone to opt out. The young people of sixth class learn communication skills, decision making and the effects of alcohol and cigarettes, in an age appropriate programme. And they receive a silicone (wrist) band, like those that all the kids wear these days, and the bands have the gifts of the Holy Spirit printed on them,” he told Catholicireland.net.

TY students benefit greatly from facilitating these peer education schemes. The programme the bishops referred to, where students will educate parents, is being organised at the moment.

Approximately 25 parishes have been involved at different levels so far, and the thinking behind the programme is inspired by Amoris Laetitia (The Joy Of Love) and Pope Francis’ outreach to those affected by addiction.

In his message for International Day Against Drug Abuse his Eminence Cardinal Peter Turkson, Prefect of the Dicastery for Promoting Integral Human Development, stated that drugs have become a consumer product and part of daily life, recreational activity and the search for well-being.

He stated that while the consumption of cocaine has been associated with a greater spread of heroin, there are new “psychotropic intoxicant drugs”, and cannabis has the highest levels of consumption. There is an international debate on the drug but with little ethical judgement.

He said that “This debate tends to omit ethical judgement on this drug, which is in itself negative as is the case with every other drug, and to look at its possible therapeutic uses, a terrain where we are awaiting scientific data supported by periods of monitoring, as should take place with all experimentation that is worthy of public consideration.”

He called for adequate resources which might help not just with emergency solutions for crises that arise but which would help build a “serious culture of prevention” with proper objectives, instruments and resources to assure constancy and durability in dealing with the problems involved.

He said that any strategies and action should not stop short at a mere reduction of harm. Quoting Pope Francis’ address to the Pontifical Academy of Sciences on ‘Narcotics: Problems and Solutions of this Global Issue’ on 24 November 2016, he said: “We cannot stoop to the injustice of categorising drug addicts as if they were mere objects or broken machines; each person must be valued and appreciated in his or her dignity in order to enable them to be healed.”

Cardinal Turkson said that to counter the “ephemeral happiness” of addiction, young people should hear from adults who are able to teach and practise healthy self-care, and give them a spiritual vision of existence.