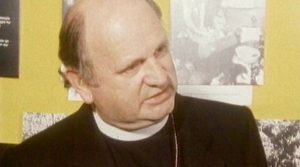 The former bishop of Galway, Dr Eamonn Casey, who resigned in 1992 after it was revealed he had fathered a son, died on Monday aged 89. He had been suffering from Alzheimer’s Disease.

In a statement, the Primate of All Ireland Archbishop Eamon Martin referred to Bishop Casey’s “inspirational leadership” of Trócaire, which he had helped found in the 1970s.

Archbishop Martin said he had “pioneered” a very significant pastoral outreach from Ireland towards the most vulnerable people in the developing world, while at the same time he energetically raised awareness of overseas development issues at home in Ireland.

Bishop Casey was chairman of Trócaire until his resignation in 1992. He also contributed to the planning of the successful 1979 visit of Pope Saint John Paul II to Ireland.

“Both as priest and bishop, Bishop Casey’s ministry on behalf of Irish emigrants is well known and was of immense significance in particular to the Irish in Britain,” Archbishop Martin said.

The Bishop Emeritus of Galway and Kilmacduagh resigned in May 1992 for “personal reasons’’, following the revelation in The Irish Times that he had been making payments to Annie Murphy over a 15-year period.

Annie Murphy later claimed that Bishop Casey wanted Peter Murphy to be adopted, but she returned to the US with her son.

Up to the revelation in 1992, Casey refused to engage with his son, though he did make payments towards his upkeep.

But questions were later raised over his use of £70,000 of diocesan funds for this purpose.

After he fled Ireland in 1992, Eamonn Casey spent time in the US before he went to work as a missionary priest in Ecuador for six years.

In 1998 he moved to Britain where he ministered in an English parish in Sussex before retiring to Co. Galway in 2006. He spent the years since 2011 in a nursing home in Co. Clare.

Eamonn Casey was born in Firies, near Farranfore, Co. Kerry, on 23 April 1927, the second son of a family of five sons and five daughters.

Two of the boys chose to become priests – Eamonn for Limerick diocese and Micheal in Australia. Eamonn Casey entered St Patrick’s College, Maynooth in 1944 and was ordained in 1951.

In 1960 he worked as an emigrant chaplain to Slough, west of London, at a time when thousands of people were leaving Ireland every year in search of work.

He became active in the Catholic Housing Aid Society, moving to London in 1963.

In a statement on Monday, Canon Michael McLoughlin, diocesan administrator of the Diocese of Galway, Kilmacduagh and Kilfenora said, “When we witness homelessness, poverty and inequality in our society we remember with renewed respect his initiative, his tremendous work and his tenacious spirit among Irish emigrants in England, which ensured for so many the dignity of shelter and a place they could call home.

Paying tribute to Bishop Casey’s “indefatigable and boundless energy, and his ability to lift and inspire generosity in people”, he said he saw the building of churches for a growing population at Barna, Seamus Quirke Road, Headford Road, Ballybane, Knocknacarra, Maree and adjacent to the NUI Galway campus.

He spearheaded the work of Trocáire and helped found Galway Social Services. He established chaplaincies to respond to the needs of members of the Travelling Community and of prisoners at home and overseas.

“Bishop Eamonn brought blessings to many people. But to be human is to be both blessed and to be flawed. Some of his actions caused great hurt and the circumstances giving rise to his resignation in 1992 have been the subject of ongoing analysis,” Canon Michael McLoughlin said.

“Bishop Eamonn asked for forgiveness from all those that he hurt and he went on to minister in both Ecuador and England before returning to Ireland to retire in January 2006.”

His passionate advocacy for social justice and for those marginalised by inequality gave him a significant public profile and his work in this area continued throughout his life.

Following the retirement of Bishop Michael Brown after 39 years as bishop of Galway, Bishop Casey was installed as his replacement in July 1976.

Over the next 16 years he worked to ensure that the Diocese of Galway responded effectively to a very significant growth in the urban population.

In a time of extraordinarily high bank interest rates, Bishop Casey established the ‘Meitheal Programme’, whereby individual parishes could borrow development finance from a central fund at a nominal cost.

He was also instrumental in establishing Galway Social Services as well as outreach services for members of the Travelling Community and prisoners at home and abroad.

Bishop Casey was present at the funeral of his murdered friend Archbishop Oscar Romero of El Salvador when the liturgy was interrupted by bombs and intense gunfire which left almost fifty mourners dead.

Bishop Casey also voiced strong objections to the visit of Ronald Reagan, President of the United States of America, to Galway in 1984 because of American foreign policy, particularly in Central America.