In light of the recent media focus on the seminary in Maynooth, Bishop Denis Nulty has said he prays most of all for the aspiring seminarians who intend taking the plunge into a pool without lifeguards.

“I think of the men who have been reflecting about discerning their vocation journey maybe over years and in the year they intend to take the plunge, the lifeguards are missing and the pool seems very deep,” he said.

“In every crisis there is an opportunity and perhaps the time is coming to reevaluate how formation actually takes place – naturally there must be learning, discerning and maturing in one’s journey, but parallel to it there must also be a rootedness in a diocese or a congregation where an individual one day hopes to minister and serve.” 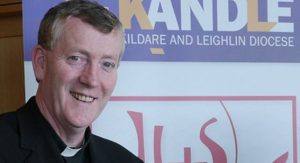 Bishop Denis Nulty was marking the 50th anniversary of St Eustace’s Church, Newbridge and 800 years since the foundation of the Dominican Order.

In his homily on 7 August, Dr Nulty posed the question – what is meant by the term ‘church’?

He spoke of World Youth Day in Krakow where the Church was a field.

St Eustace’s church in Newbridge is relatively young at 50 years of age, but it is the third church on the site.

The first church was opened on Christmas Day in 1819; the second in 1870 and the third on 10 July 1966 by the Irish Dominican, Cardinal Michael Browne.

He was the first Irishman to have been elected Master of the Dominican Order.

The bishop said that fifty years ago when St Eustace’s church was opened the fiftieth celebrations of the Easter Rising were taking place and there were many sensitivities and many memories.

But this year of centenary celebrations of the 1916 Rising and of the Somme, he suggested was different.

Likewise, the celebrations the Church and those for the Dominican Order are underlined by all present at the day of celebration – the choir, the readers, Eucharistic ministers, collectors, lay Dominicans, church volunteers, parish team, local religious, board of governors and parents’ association from the College.

“If we need to answer the question I posed at the beginning of this homily, what we mean by the phrase or term ‘church’, I suggest it’s very much here we find the answer,” he said.

He concluded last Sunday’s (7 August) celebrations with the Jubilee Prayer entitled ‘Sent to preach the Gospel’.

All over the world and in Ireland the Dominican order is celebrating 800 years since foundation and met with the Pope earlier this month (see story on CatholicIreland News 05 August 2016).

The Dominicans arrived in Newbridge in 1756.

The present church was built and opened for worship in 1966.

Much of the Art work in the church including the Stations of the Cross, the crucifixion group, altar panels and Madonna and Child are the work of the well known Dominican sculptor, Fr Henry Flanagan, who was a member of the community for most of his life up to the time of his death in 1992.