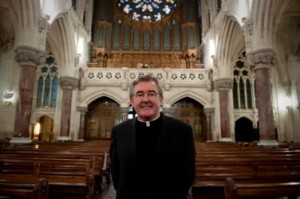 Bishop William Crean of Cloyne has hit out at the silence of politicians and the media in response to the number of abortions which took place in Ireland in 2019, the first year that abortion was legal following the repeal of the Eighth Amendment.

In his homily on Sunday at St Colman’s Cathedral in Cobh, Bishop Crean referred to the Department of Health’s report which detailed 6,666 “Terminations of Pregnancy” during 2019, the first full year of legal abortion since the new law came into effect in January 2019.

“The silence with which it was greeted by politicians and media was shocking in its acquiescent silence,” the Bishop of Cloyne criticised.

He noted that before the repeal of the Eighth Amendment there had been assurances that abortion would be a rare occurrence and only when necessary.

“Those unborn got no choice, they too were displaced by a calculated choice which violated their dignity and worth,” he said.

He contrasted the silence on the abortion figures with the “statistics which came to us in the midst of the threat of Covid-19 – of which those at the twilight of life are the most likely victims”. He added that it was heart-warming to witness the care and compassion they had received.

Dr Crean’s comments echoed the statement from the Bishops’ Council for Life on the abortion figures which noted the “staggering” contrast between the collective grief of the nation over the death of 1,735 people from Covid-19 and the “bland five page report” from the Department of Health detailing the number of unborn babies aborted.

While there would be no public grief over the deaths of the 6,666 unborn babies, the Council said that there would be “much unexpressed personal grief.” It invited all those affected by abortion – women and men – to avail of spiritual, sacramental and pastoral support to help them find healing and peace.

Elsewhere in his homily on Sunday, Bishop Crean noted that this week marks the seventh anniversary of Pope Francis’ surprise visit to Lampedusa in southern Italy to draw attention to the plight of migrants – people displaced by poverty and violence from their home in search of a better life.

He said the Pope was striving to get all nations and peoples to understand the interconnected nature of humanity and the physical world – our common home.

He said one of the side effects of people’s experience of working from home is that they are prompted to think again about the place they call home.

“Some people have had the experience of working from a location where they have had a new experience of nature – be it hearing the birdsong in the morning, to walks in woodlands, parks or by the waters edge. It is an experience that is a kind of reawakening – it has touched their lives on the level of wellbeing both of body and spirit.”

He said this made people aware of the importance of their relationship not just with nature but also with the architectural environment in which they live – including homes, schools and community services.

“What we are coming to realise is that all these experiences – home, work, school, music, play and spirituality are important threads in the fabric of our lives. When they are woven together, we have a balance that enables us to live wholesome and contented lives. The opposite is also true.”

Referring to God the Creator as the great sower casting out seed he said, “Nothing and no one is wasted or lost, rather, together we form the threads of the rich tapestry letting our texture and colour contribute in our own small way to make it a wonderful world for all.”