US bishop to close Youth2000 festival 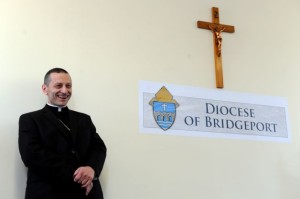 Bishop Frank Caggiano of Bridgeport in the US will today preside at the closing Mass of the four-day Youth2000 festival which has been taking place since Thursday at Mount St Joseph’s Abbey in Roscrea, Co Tipperary.

The Bishop, who was a speaker at WYD2013 in Rio de Janeiro and also at WYD2011 in Madrid, addressed this year’s Youth2000 festival four times on themes such as, ‘Encountering Jesus in the Eucharist’ and ‘Reconciliation and God’s Mercy’ as well as ‘Mary, Our Mother, a gift from God’ and ‘Lord it is wonderful for us to be here’.

The gathering has seen hundreds of young Catholics between 18-30 listen to a host of speakers and attend workshops as well as Masses celebrated by the papal Nuncio, Archbishop Charles Browne, and Bishop Kieron O’Reilly of Killaloe between 15-18 August.

The workshops included one on ‘Christian Witness in the Gulag’ given by Canadian-born Fr Michael Shields who is currently based in Siberia.

Other included an address by Iona Institute director, David Quinn, on the defence of marriage. Senator Ronan Mullen spoke on ‘The Faith to Change Ireland’; Jesuit Fr Leon O’Giolláin on mental health and Ann-Marie Gallagher on vocations.

This year, the venue for the largest national Catholic youth festival in Ireland was moved from the monastic site at Clonmacnois to the Cistercians in Roscrea at the invitation of the Abbot of Mount Saint Joseph Abbey.

The theme for the event was chosen from Hebrews, “Fixing our eyes on Jesus who leads us in our faith.”

Speaking ahead of the opening of the festival, Dom Richard Purcell said he was delighted to welcome the summer festival to Tipperary.

“Monasteries have been important places of spiritual nourishment and hospitality for people of every generation. In this Year of Faith, I see it as particularly significant that Youth2000 have accepted our invitation to hold their summer festival on the campus.” 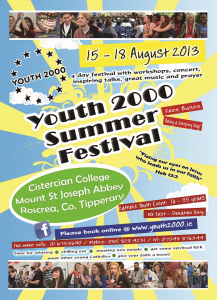 He described Mount St Joseph Abbey as part of the living monastic tradition. “During the festival we will be one big faith-community united in our prayer and search for God,” he said.

Bishop Frank Caggiano was ordained to the priesthood in May 1987 and earned his doctorate degree from the Pontifical University in Rome in 1996. In August 2006, he was ordained Auxiliary Bishop of Brooklyn in New York.

This is not his first visit to Ireland. In 2009, he addressed the Youth2000 summer festival in Clonmacnois.

He was back in Ireland last June for the International Eucharistic Congress in Dublin where he challenged the young people present to be courageous witnesses to the faith.