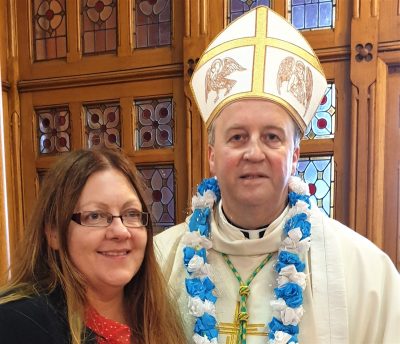 Bishop Michael Router of Armagh has said he has ‘great faith in the youth of today’ that they can see through the lies promoted by the abortion industry thanks to their education and innate sense of justice.

In his homily for the Dedication of Studies Mass at Queen’s University Belfast on Sunday, the auxiliary bishop of Armagh said he believed young people saw that the ending of innocent life through abortion is ‘one of the great injustices of our time’.

‘Abortion has been described as either healthcare or a human right but to do so is to twist language and to misrepresent the true meaning of those terms in the most remarkable way,’ he said.

Discussing the impact of secular ideologies, he said they had made ‘choice’ a god in today’s world and that this message was constantly presented through the media, advertising and popular culture such as music and its accompanying videos.

‘It is proclaimed with abandon that everyone has the right to choose even if those choices bring destruction on themselves or others.’

He added that this worship of individual choice, separated from any obligation to the common good, had led to a widespread acceptance of the right to choose to end human life in the womb.

‘It has become increasingly difficult for people, young Christians in particular, to speak out for what they know to be true – that every human life has a value and ought not, at any stage, to be destroyed or disposed of at will.’

However, Dr Router stressed that opposition to abortion must always be expressed in the language of love – love for the woman who feels forced to make her choice, and love for the born child as well as the unborn.

Elsewhere in his homily at Queen’s University, Bishop Router said consumerism and excessive individualism are the subtle enemies of a free and just society.

‘We are encouraged today to look after only ourselves or a few close loved ones and ignore those outside that circle. Fear of others is actually encouraged in society so that we will be more compliant consumers wishing to insulate ourselves from the big bad world. Various secular and non-Christian ideologies want you to forget the past, to spurn the experiences of your elders and reject the spiritual and human riches inherited from past generations.’

He warned that these ideologies also use the ‘cult of youth’ to manipulate young people and make them feel worthless if they don’t fit into the idealised image of youth they promote.

‘Whatever is not young, slim and beautiful is sidelined and in that way the young are exploited for political and financial profit,’ the bishop criticised.

‘Remember beauty and eternal youth [are] found in those who have aged gracefully, those who suffer illness or disability, those who sacrifice themselves for others, those who are committed to a husband or wife through thick and thin or those who work long and hard to feed their families.’

‘Our dreams are not instantly attainable but are the work of time, patience and commitment.’

Yet despite this the Pope warns in his encyclical Christus Vivit (‘Christ is Alive’) against being afraid to take risks or to make mistakes because you can always start again, ‘for no one has the right to rob you of hope’.

The Pope also advises the young not to ‘observe life from a balcony. Don’t confuse happiness with an armchair, or live your life behind a screen … Don’t be parked cars, but dream freely and make good decisions … Cast out the fears that paralyse you, so that you don’t become young mummies. Live! Give yourselves over to the best of life! Open the door of the cage, go out and fly! Please, don’t take early retirement.’

Acknowledging that these are not the words you would expect to hear from an 82-year-old pope, Dr Router said Francis recognised that the energy, enthusiasm and idealism of youth is a good thing as it can be the catalyst to bring about positive change. He praised those who commit themselves to volunteer work that shows solidarity with others.

‘Those who mentor the young must accompany them and encourage them particularly in their direct contact with the poor and the less fortunate in our world. Such social engagement can lead to a deepening of one’s own faith and the discernment of one’s vocation in life.’

The Pope, Bishop Router said, acknowledges that this is happening in so many ways in school and university groups through visitation to the elderly and the sick, and in charity work such as the establishment of soup kitchens for the homeless.

‘Through such activity we can receive more than we give and grow in wisdom and maturity when we make the time to touch and understand the suffering of others. Pope Francis reminds us that the poor have a hidden wisdom and, with a few simple words, they can help us discover unexpected values.’

Pope Francis also recognised that young people have a desire to build a better world.