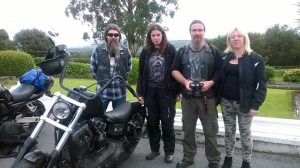 Their visit was meticulously planned by them to honour and pray for their deceased friends and family members.

The Mass, tea and sticky buns that followed were organised by bikers from Munster and the wider area of the southern half of Ireland.

The Cistercian monks had gathered as normal for prayers in the monastery chapel on Saturday last (17 September) and as they finished, the bikers who had assembled at the monastery gate, rode in convoy up the avenue.

“We were just saying our prayers at quarter past two and as we were finishing off we could hear the convoy coming up the avenue,” Fr Denis Luke told Catholicireland.net.

“Seeing them come up the Avenue, it was like two worlds meeting.”

He is one of the Cistercians who was present with the other monks and local parish priest of Cappoquin, Fr Pat Gear, who celebrated the Mass.

Melleray was chosen because of its beautiful setting in the Knockmealdown mountains in Co Waterford. Fr Grear welcomed everyone to a beautiful and a holy place. 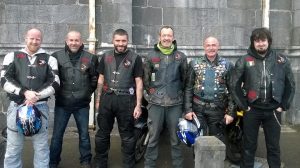 The monastery chapel was packed to capacity with bikers but also families of bikers who had lost their lives in motorcycle accidents.

“I met a mother who had lost her son in a motorbike accident so there were bikers and family members. It was a very spiritual experience for us and for them,” said Fr Denis Luke.

He added that there were also those who have been injured in accidents and he saw a woman who had lost a leg going up to communion.

Fr Luke said there was full participation in the Mass. Those present were very thankful to the monks for hosting the Mass and were very generous in the collection to fund Mount Melleray and the work of the monks there.

Those who have lost their lives were also remembered in a special way when a Scots Pine tree was planted in the grounds of the monastery in their honour and the name of each deceased person was placed on the tree.

This is the first such occasion at Mount Melleray and it may become an annual event in future.

Those involved in biking in the other half of Ireland, North of Dublin, go to an annual Mass for bikers in Clones, an occasion which has been organised ‘Gone but Not Forgotten Bikers Memorial’ group. 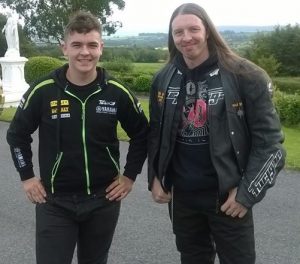 Other such events are held in Catholic churches throughout Europe.

For example on the feast of St Columban in Northern Italy there is a tradition of blessing motorcycles, cars, and trucks to ask the patron saint of bikers for safe driving.

This tradition has its origin with Columban as a pilgrim, who journeyed over dangerous lands that eventually brought him to Bobbio.

His love of the open road inspired the Rev John Oliver, an Anglican bishop and biker, to suggest St Columbanus as the patron of motorcyclists.

In 2002, Columban was officially declared patron by the Vatican.

Fr Derry Healy, in an article on St Columban quoted the words of a Harley Davison biker stating, “If Columban were alive today I imagine him riding a Harley Fat Boy. It’s got a 1,584cc push rod V-twin engine; six gears, massive torque, has no saddlebags and ideal for itinerant monks flying those twisty roads in Europe.”