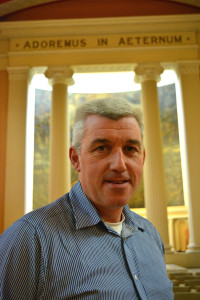 Following the success of the inaugural Ecumenical Bible Week last year, this year’s 32 events have been announced and will run from Pentecost Sunday to Trinity Sunday (24 to 31 May) in 15 venues across Dublin, Kildare and Wicklow.

The week will once again bring together representatives of Ireland’s main Christian Churches as they explore and study the application of the Word of God to life and culture.

The theme of this year’s Ecumenical Bible Week is ‘What is the Spirit saying to the Churches?’ and this will also be the focus of the chaired panel discussion among Church leaders and the public in ‘Thinking Allowed’ in All Hallows College in Drumcondra on Thursday 28 May.

Gerard Gallagher of the Office of Evangelisation in the Archdiocese of Dublin told CatholicIreland.net that the various talks are aimed at the interested ordinary believer or enquirer. Some of the presentations are offered more than once in different locations over the week while others are offered just once. 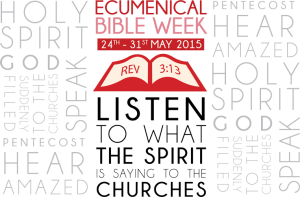 Dublin’s Pastoral Co-Ordinator explained that while the focus is the Bible it is approached from different perspectives.

Some talks examine the Bible through the lens of film, others music, while some use ethics and the law.

Traditional approaches such as prayer (lectio divina), how to open the Bible and how to organise a Bible study group are also dealt with.

Ecumenical Bible Week started last year as an experiment which grew out of the collaboration among the Churches in IEC2012 and the Year of Evangelisation. The co–chairs are Fr Kieran O’Mahony and the Rev Ken Rue.

As the 2014 Ecumenical Bible Week was deemed a success, those involved decided to run it again this year. “At the end everyone said let’s do it again, so the programme for this year is a very similar response,” Gerard Gallagher said.

He explained the Churches involved were “encouraging each other to explore the Bible together” and in the process sharing venues and the leadership of the week.

The Catholic and Church of Ireland dioceses of Dublin and Dublin & Glendalough are the principal donors for the week. 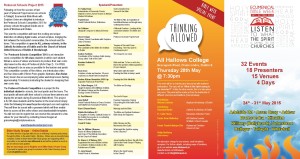 “There are costs but we invite sponsorship or donations from other faith groups as well. Not all of them would have the means but we aren’t excluding them if they don’t,” according to Gerard Gallagher.

The faith groups involved are represented on a plenary group which acts as an umbrella for everyone from the Orthodox tradition to Quakers to Evangelical groups and some movements like the Mothers Union and other groups with a faith component.

The Scripture Union is also involved with schools through a programme called the ‘Pentecost Project’ which seeks to nurture and develop scripture through art and digital art.

Each school involved in the project produce their own comic strip based on the story of the Pentecost. The resources include explanatory video workshops with O’Brien Press’ graphic illustrator, Alan Nolan.

Local parishes work with the schools to choose winners whose work is displayed during Ecumenical Bible Week. 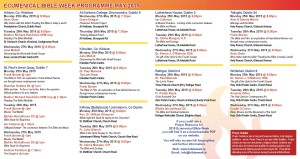 The week also means that Dublin city centre church, St Paul’s on Arran Quay, will be opened to the public for a series of lunchtime and evening lectures.

According to Gerard Gallagher, talks such as Frank Brown’s ‘The Bible in Film’ will hopefully bring in some Lighthouse Cinema-goers and offer them an opportunity to engage with scripture.

Another contributor to the week is a spokesman for the Armenian community in Ireland, Dr Paul Manook, who looks at the Lord’s Prayer in Aramaic, the ancient language used by Jesus.

“You don’t need a doctorate or an MA to be there. Just come along as you are and each presentation begins and ends in an hour and a half,” Gerard Gallagher urged.

He added that it is an invitation to the general inquirer. “Whatever stage you are at in terms of curiosity about the Bible – whether you are a scholar or a novice – there is something for everyone to be part of.”

He said the round table discussion on 28 May among all the Church leaders promises to be a “fascinating event”.

“Most people are open ecumenically or they are open to be challenged by ecumenism. That is what Bible Week tries to set out to do, to see that we are all praying the scripture and how that can really make a change in our lives.

Full listings for the talks and events talking place for Ecumenical Bible Week can be read here: