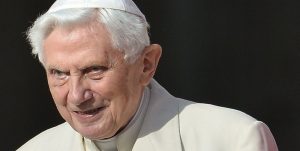 Retired pontiff Benedict XVI has weighed into the debate over the clerical paedophilia crisis, arguing that its roots can be traced back to the permissiveness of the 1960s.

In an essay published in Klerusblatt, a monthly periodical for clergy in mostly Bavarian dioceses, the Pope Emeritus blames the clerical sexual abuse crisis not just on the sexual revolution of the 1960s, but also on the disappearance of God from public discourse in the West and liberal theological ideas that eroded morality after the reforms of Vatican II.

“In the 1960s an egregious event occurred, on a scale unprecedented in history. It could be said that in the 20 years from 1960 to 1980, the previously normative standards regarding sexuality collapsed entirely, and a new normalcy arose that has by now been the subject of laborious attempts at disruption,” he states.

The retired Pope, who stepped back from the papacy in 2013, stresses in his essay that the effects of the sexual revolution of 1968 on priests and seminarians were seriously damaging and that paedophilia was at the time “also diagnosed as allowed and appropriate”.

“The extensive collapse of the next generation of priests in those years and the very high number of laicisations were a consequence of all these developments. At the same time, independently of this development, Catholic moral theology suffered a collapse that rendered the Church defenceless against these changes in society,” the former head of the Congregation for the Doctrine of Faith states.

He claims that in some seminaries homosexual cliques were established, which acted more or less openly and significantly changed the climate in the seminaries.

Last August, the former papal ambassador to Washington, Archbishop Carlo Maria Viganò, wrote an open letter calling on Pope Francis to resign and accusing him of covering up gay cabals inside the Church. He also accused the Pope of covering up disgraced former Cardinal Theodore McCarrick’s abuse.

Elsewhere in his essay, the retired Pope, who turns 92 next week, writes, “As regards the problem of preparation for priestly ministry in seminaries, there is in fact a far-reaching breakdown of the previous form of this preparation.”

He explains at the outset of his essay that it is written as part of his attempt to respond to the Vatican Meeting on the Protection of Minors in February, at which the presidents of the world’s bishops’ conferences gathered to discuss the current crisis of the faith and of the Church.

“The extent and gravity of the reported incidents has deeply distressed priests as well as laity, and has caused more than a few to call into question the very Faith of the Church. It was necessary to send out a strong message, and seek out a new beginning, so to make the Church again truly credible as a light among peoples and as a force in service against the powers of destruction,” Benedict XVI writes.

“Since I myself had served in a position of responsibility as shepherd of the Church at the time of the public outbreak of the crisis, and during the run-up to it, I had to ask myself – even though, as emeritus, I am no longer directly responsible – what I could contribute to a new beginning.”

He also reveals that his essay was seen by Pope Francis and the Vatican Secretary of State, Cardinal Pietro Parolin.

However, the essay has drawn strong criticism from some Catholic commentators.

Jesuit theologian Fr James Martin tweeted, “I have the greatest respect for Pope Emeritus Benedict XVI, especially as a theologian. However, I disagree with most of his analysis of the sex abuse crisis. Blaming it on poor theology and the sexual mores of the 1960s dramatically misses the mark.”

Clerical abuse survivor Marie Collins tweeted a dismissal, “It’s Satan, it’s the 60s … no, it’s not. It is men who have no conscience and harm children for their own gratification. They didn’t spring up in the 60s, they have always been with us.”

Historian and theologian at Villanova University Professor Massimo Faggioli responded by warning that the former Pope’s essay “does much more harm to the prestige of Benedict than to Francis’ ability to govern. I think Benedict XVI loves Francis and there is no malicious intent – which is something that cannot be said for some who are in Benedict’s entourage.”

The full text of Benedict XVI’s article can be read here: https://www.catholicnewsagency.com/news/full-text-of-benedict-xvi-the-church-and-the-scandal-of-sexual-abuse-59639.