Baptism criterion could ‘easily’ be removed 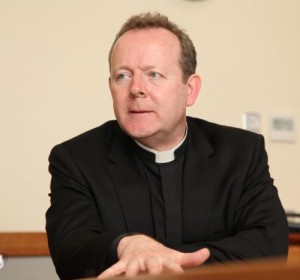 There should be a more plural offering of schools in Ireland to represent where people are at, according to Archbishop Eamon Martin, Primate of All Ireland.

He added that the Catholic Church is open to this, and to removing criterion that children have to be baptised to get into a catholic school.

Speaking to Damian O’Reilly of RTE Radio 1’s Countrywide programme from St Patrick’s Cathedral in Armagh, Archbishop Eamon Martin said, “The Catholic Church has no interest in having a monopoly of all of the schools of Ireland. It is far more important to have a strong Catholic ethos in a school which wishes to be a Catholic School.”

He said that surveys and work done around the Forum on Patronage and Pluralism showed that parish communities were often reluctant to have the Catholic ethos of their local schools changed.

The Archbishop said that as long as people work together and no one is forced into anything or challenged in a confrontational way, change will come.

When asked by Damian O’Reilly about how many parents feel under pressure to baptise children to gain entry into a Catholic school Archbishop Martin said, “I think that is overstatement.”

He said he resented a little bit this impression that people are having their children baptised to get them into a school.

“There may be examples of that but I think that is hugely overstated, and it is also an insult to people who choose to have their children baptised because they want them to be brought up in their faith.”

He added that in his 28 years of priesthood he has never had the sense that anyone coming to him about baptising a child was doing it to get that child into a Catholic school.

He said that it is very, very, rare for a school to use the criterion of baptism. It is just one of many criterion used in the Republic of Ireland and it is not used in Northern Ireland and is not even on the books.

“I think that (baptism) criterion could easily be removed. I would hate to think that baptism is some sort of stamp that you had to get in order to get into a school. I think it is far, far, more important than that for most people,” he said.

“I think there are some people in Ireland who would really love to have a completely secular school with absolutely no influence of religion whatsoever. Sometimes I wonder is that in itself an ideology?” he said.

In a wide ranging interview he answered questions on falling vocations, the same sex marriage referendum, and if the effects of the child abuse scandal are still being felt.

On falling vocations he said that this has allowed the laity to find their place in the church, something which was envisioned in Vatican II. He will be inviting more religious orders to his diocese to encourage more vocations to the religious life.

He concluded stating that Pope Francis is interested in visiting Ireland and that the 2018 world meeting of families in Dublin might be the occasion that the Pope chooses to visit the country. The Pope has already been asked to visit and a more formal letter about the potential visit will be sent soon.