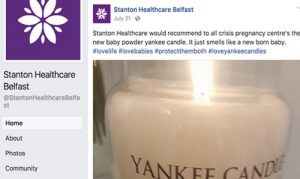 Stanton Healthcare in Belfast came under fire from abortion advocates earlier this month after posting a photograph on its Facebook page of a baby powder scented Yankee Candle.

The seemingly unassuming photo was labelled with the caption, ‘Stanton Healthcare would recommend to all crisis pregnancy centres the new baby powder Yankee Candle. It just smells like a newborn baby. #lovelife #lovebabies #protectthemboth #loveyankeecandles.’

The post was branded “manipulating” and “patronising” by dozens of people who support abortion, including the British Pregnancy Advice Service, the UK’s largest abortion provider.

Director of Precious Life Bernadette Smyth, who worked closely with Stanton Healthcare to bring the clinic to Belfast in 2012, said “It’s truly an unbelievable situation. It’s completely absurd that the lighting of a scented candle has provoked such outrage.

“We’ve witnessed such anger and vulgarity over a candle, but we have yet to hear a word from ‘women’s rights’ advocates over the 400 botched abortions which took place at Marie Stopes in just six months.”

According to Stanton Healthcare, the post attracted not only furious criticism but also widespread support.

The Belfast branch of Stanton Healthcare was established in 2012. Its main branch is situated in Boise, Idaho. Its mission, as stated on its main website, is to “prevent teen pregnancy and the spread of sexually transmitted diseases and to provide women facing an unplanned pregnancy with life-affirming options in an environment that promotes physical, emotional, and mental well-being”.

It provides “holistic services” to clients experiencing an unexpected pregnancy, and ongoing relational care to women and men as they navigate pregnancy and parenthood. 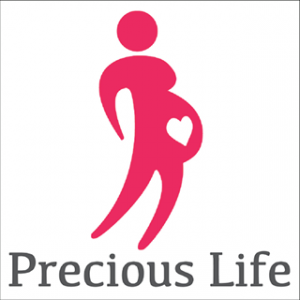 The organisation also promotes “sexual integrity and gives assistance to those struggling emotionally or physically from previous abortion or pregnancy loss”.

Bernadette Smyth founded Precious Life in 1997 after she saw a picture of a baby killed by abortion. “I was horrified to know that this could happen to a child and decided to do something about it,” she says. Since that day, Precious Life has worked to keep abortion out of Northern Ireland.

The organisation is the largest pro-life group in Northern Ireland and the only one actively working on the streets every day. According to its website, it is made up of people from all sections of the community who “care deeply about unborn children and their mothers. We are non-denominational and non-party political”.