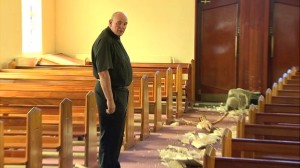 The PSNI has said there was no sectarian motive behind the damage done to Our Lady of the Angels oratory in Kilkeel, Co Down which left crosses, statues, pews and windows smashed.

However, in a statement issued on Thursday, Bishop Noel Treanor of Down and Connor described the attack as an “act of pointless destruction”.

He said it was “calculated to escalate tensions at a time of the year when every effort must be made by all citizens to promote respect and peace.”

The attack took place some time between 11pm on Wednesday night and 9am on Thursday morning.

Parish priest, Fr Michael Murray said parishioners who arrived on Thursday morning for 9.30am Mass had to be turned away.

“When they heard about the damage that had been done, some of them broke down in tears,” Fr Murray said.

He said he himself was “just heartbroken” and “saddened” by the vandalism.

In his statement, Bishop Treanor said the attack caused substantial damage to the oratory and its sacred furnishings.

“The perpetrators of this callous and cowardly action violated a place of worship and left an entire local community appalled, distressed and deeply upset,” Bishop Treanor said.

He added, “Places of worship hold deep significance for the entire community and for their congregations and they should not be targeted.”

The Bishop of Down and Connor appealed to all those in positions of leadership, media, community workers, Church ministers, politicians and other organisations “to continue to exercise responsible governance, to condemn with courage such actions as that perpetrated in Kilkeel last night.”

He called on them “to do all within their power to dissipate and calm fears and apprehensions rather than enflame tensions, conscious of the authority and consequences of their public voice.”

Dr Treanor concluded his statement, “Together with all citizens of good will concerned for the common good, I pray that all of us will work for peace, harmony and good neighbourliness in the days, weeks and months ahead so that we, our children and our society may enjoy a shared future that is viable for all.”

The Bishop also encouraged anyone with information in relation to the attack on Our Lady of the Angels Oratory to contact and assist the PSNI with their investigations.

The attack was condemned by Drew Nelson of the Orange Order in Co Down, who said, “This criminal act is as shameful and sinful as an attack on an Orange hall. It is wrong and I utterly condemn the actions of those responsible.”