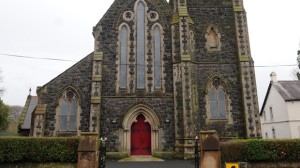 Saturday evening’s attack on a Catholic Church in Belfast, the fifth incident at the church in the last year, has been condemned as “despicable and completely sectarian.”

The Church of St Mary Star of the Sea on the Shore Road in north Belfast was damaged after it was petrol and paint bombed at the weekend.

Parish priest, Fr Anthony Alexander, described the attack as “upsetting, particularly for the older members of the congregation.”

Asked abut the repeated targeting of his church, Fr Alexander said he couldn’t “work out why it is happening – I can’t guess why they are doing it. I find it hard to understand why people would vandalise somewhere, let alone a place of worship,” he said.

He paid tribute to the PSNI and members of the local community and other churches who he said had been “very supportive and helpful.”

According to a PSNI spokesperson, “Scorch marking on the door and side of the building suggest a petrol bomb was thrown at the premises and there is also evidence of a paint bomb having been thrown at the brickwork.”

Reacting to news of the attack, the DUP MP for North Belfast, Nigel Dodds said, “It is utterly appalling and inexcusable that any place of worship should be targeted for attack.”

He added, “Sectarian attacks against churches, Orange Halls or other venues are hate crimes which must be stopped.”

Sinn Féin councillor Gerry O’Reilly said “Local people are very upset at this latest attack; there is no justification for such attacks on any place of worship.”

He urged members of the Unionist community to “stand shoulder to shoulder with the church’s parishioners and use whatever influence they have to end the attacks.”