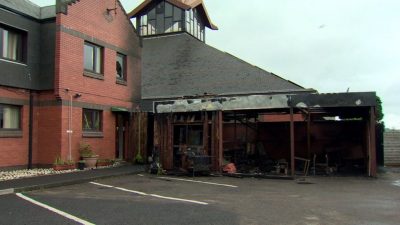 Politicians, the media and church-goers in Northern Ireland have condemned last Friday’s arson attack on a Catholic church in Derry.

As many as 20 firefighters battled the blaze at a building adjacent to the Holy Family Church in Ballymagroarty. The building had been set alight at around 10.30 p.m. on Friday evening.

According to Northern Ireland’s Fire Service, CCTV footage shows a group of youths starting the fire in a shed, which was destroyed. Windows in the parochial house were blown out by the heat of the blaze and the roof of the church was also damaged.

At Mass on Sunday, parish priest, Fr Paddy O’Kane, and his parishioners prayed for those behind the attack.

The Editorial in the Belfast Telegraph on Monday said it was “disturbing to think that even a parish priest has no guarantee of safety in his home.”

Stating that all attacks on property are to be condemned, the editorial said that the deliberate targeting of a church was “particularly heinous”.

“Apart from the obvious danger to life, attacks on churches cause a special revulsion because of their historical role in providing sanctuary and a normally safe place for worship.

“Such attacks have been experienced by churches of both main communities, as well as similar arsons on premises owned by the Orange Order, which is foremost a religious organisation, and therefore such damage attracts the same opprobrium.

“In recent times there have been a wide range of attacks on buildings clerical and secular, and all are to be condemned. Such an attack is not only on a building but on the wider community, which is totally opposed to such sectarian savagery.”

The editorial in the Belfast Telegraph concluded, “This was not only an attack on a church, but as a peace-hungry society, this was an attack on all of us.”

The DUP’s MLA for Foyle, Gary Middleton, offered his sympathies to the community. In a tweet, he said the arson attack was a “terrible act of vandalism and desecration”.