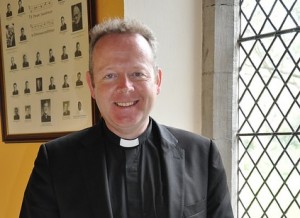 The Archbishop of Armagh has asked all Catholics to pray for five people in their lives, as part of the Thy Kingdom Come prayer initiative.

Archbishop Eamon Martin made the request at a homily at Our Lady’s Basilica in Knock.

Thy Kingdom Come began in 2016 when the Anglican Archbishop of Canterbury asked Christians to join him, between Ascension Thursday and Pentecost Sunday, in setting aside ten minutes every day for prayer.

Since then, the initiative has been backed by Pope Francis who this year called again on Catholics to join in the inter-denominational endeavour.

In Knock, Archbishop Martin, who is the Catholic primate of all-Ireland, said he would like to see participants use the prayer time to pray for five particular individuals of their own choosing.

He said: “I join with Pope Francis and the Anglican Archbishop Justin Welby of Canterbury and with my friend and brother Archbishop Richard Clarke [the Church of Ireland Archbishop of Armagh] in encouraging you to pray ‘Thy Kingdom Come’ in the coming days around Ascension Sunday and Pentecost Sunday.

“In particular, we encourage you to choose five particular individuals and pray that they might make the best decision that anyone can ever make in their lives – to become followers of Jesus Christ.  I ask you to think of five people – not necessarily five family members – five different people, and pray that their lives may be touched by the power of the Holy Spirit and that the love of Christ may really take root in their hearts.”

In an aside, the Archbishop Martin said in his homily that he regularly gets asked by people how should he be addressed and greeted as an Archbishop. “Well, the other day a little boy surprised me by holding up his hand and saying ‘High five, Bishop’!  The Holy Bible often speaks of believers lifting up hands in prayer.  So, in the final days leading to Pentecost, why not consider a different kind of high five?  Why not lift up your hand in prayer to the Holy Spirit, praying for those five individuals to become true followers of Jesus Christ.

“Pray for them: ‘Come Holy Spirit, Thy kingdom come’.”

Find out more about this prayer initiative at the website.