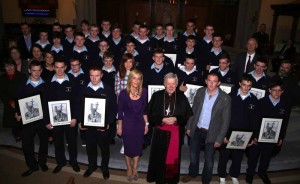 Archbishop Michael Neary of Tuam has told this year’s recipients of the John Paul II Award that he hopes it will inspire and influence them to greater participation in their local Church area.

He was speaking in Tuam as he presented 190 young people with this year’s awards, which are given to those who have successfully taken an active part in the life of their Church, the life of their community and who have also become more aware of the teaching and role of the Catholic Church in the world.

“I would ask you to make your contemporaries aware of this and share the positive experiences of Church which you have had as you participated in the John Paul II Awards,” Archbishop Neary asked over 200 young people gathered in Tuam Cathedral to receive their awards, quite a few of whom were receiving a Papal Cross.

The Archbishop presented the awards while the special guest on the day was Peter McConnell, who climbed Mount Everest earlier in the year.

Welcoming the climber, who hails from Killererin, the Archbishop noted that he had not just climbed Mount Everest but had also raised money for Pieta House by completing the climb.

“We rejoice with him in completing this gigantic task and congratulate him on raising money for such a worthy cause,” Dr Neary said.

He said it was “very encouraging” to find that while 242 young people applied for the John Paul II Award, 190 had completed it.

Referring to this year’s theme of discipleship and mission, the Archbishop said it was “very appropriate” in view of the Year of Faith.

“There can be no discipleship or mission unless people like yourselves are called and sent. Your first call came at a time which you would not have been aware and it was answered by your parents and godparents at your baptism. On that occasion you were also been sent on mission.”

“You have been called many times since then in different ways, in your local Church, in your school, in your local community. You have been invited to become part of the Mission Outreach of the Church. We are reminded of this at every Mass because while we are called we are also sent on Mission in the name of Jesus Christ,” he explained.

Archbishop Neary also paid tribute to participants in this year’s award who was not present to receive it.

“As you know Cian [Coleman] passed on to receive his eternal reward during the year. I know that this is a very difficult time for his family, his Mam and Dad, Mairéad and Michael and his sister Hannah, for his school colleagues and teachers.”

Cian’s family accepted his honorary Gold Award on his behalf.

He also paid tribute to the work being done by Trish O’Brien as diocesan youth co-ordinator. She arranged a youth ministry course which is currently training 22 people. It is hoped that from this group new youth leaders will emerge for the diocese.

The award is dedicated to the memory of the late Pope John Paul II. It was launched by the papal nuncio to Ireland, Archbishop Giuseppe Lazzarotto, on 7 November 2006 in Derry.

Anyone aged between 16 and 18 and living or going to school in the participating dioceses, can enter. It involves becoming more actively involved in the life of your parish and community.