Case of brain dead mother to be heard today 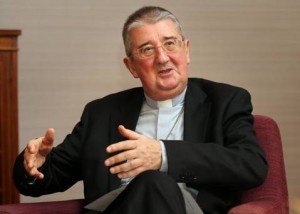 Archbishop Diarmuid Martin of Dublin has said it is a pity that a case such as that currently before the High Court involving a brain dead mother has to go to the courts for a decision.

Speaking on the Pat Kenny Show on Newstalk on Tuesday, the Archbishop said, “It should be within the area of the medical profession, but there seems to be a polarisation and a fear that if things go wrong then there will be a difficulty legally or with insurance and so on.”

“It’s a pity that these have to come to the courts. We should have a more robust, open and less conflictual” setting.

The High Court will hear further submissions tomorrow in the case of the pregnant woman who has been on life support for 20 days.

A special sitting of the three-judge court has heard evidence from a number of doctors who believe that the life support should not be continued.

The young woman, who cannot be identified, is 18 weeks pregnant with her third child.

She was admitted to a hospital on 27 November with severe headaches. Her condition deteriorated rapidly and she was later transferred to a hospital in Dublin where she did not survive surgery on her brain.

On 3 December she was declared brain dead, but doctors did not switch off life support as there were concerns of the constitutional right to life of her unborn child.

The court has heard evidence today from three obstetricians and three other doctors whom are all in agreement that continuing life support is not in the best interest of the woman and the baby is very unlikely to be born healthy.

The prospects of the child’s survival thereafter are said to be very poor.

Judge Nicholas Kerins has said that the court will make its decision on St Stephen’s Day.

Consultant obstetrician Dr Peter Boylan told the court that legal guidelines would be helpful to doctors.

He said the child was effectively in intensive care in the mother’s womb, and continuing life support in this case was “experimental” and he said doctors were in “uncharted territory.”

Elsewhere in his radio interview, Archbishop Martin said the president of the High Court had identified all the problems in an interview.

“From the point of view of Catholic teaching and general medical ethics, there is no obligation to use extraordinary means to maintain a life,” the Archbishop commented.

“That applies both to the woman and to the child. The woman isn’t simply an incubator, the relation between a woman and a child is a relationship and it is very clear that one has to look at what stage is this foetus, what are the possibilities, is it even right to use extraordinary means to prolong that life if it is not going to move…”

“There are cases, very sadly, in car accidents where a pregnant woman is kept alive so the child is born. Each of these cases has to be looked at individually, this is a very different case.”

It is a “pity” that all of these come to the courts to decide.

Asked about the issue of double effect the Archbishop said it was something that has to be looked at. “If the foetus is very near viability it puts a very different context on it,” and he added, “I think the president of the High Court has set out the parameters very clearly and they are the parameters on which the decision will be made.”

Archbishop Martin said the President of the High Court would have to make the decision on the basis of medical evidence.

“There should be a way, I believe, in which the medical profession can themselves come to a decision themselves on all these things coming through the courts.”