Home > News > Archbishop defines some of the aims of Catholic education

Archbishop defines some of the aims of Catholic education 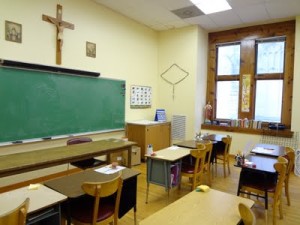 Archbishop Diarmuid Martin of Dublin has said Catholic education must never become elitist, sectarian or an educational excellence which is accessible only to those with plentiful financial means.

Nor is it about “a good general education with a religious veneer”. Instead it “must know no boundaries” in reaching out to those whose educational needs are unmet.

In his homily at a Mass in Newman University Church in Dublin on Friday evening for members of the European Committee for Catholic Education, the Primate of Ireland described education policy in Ireland as going through a period of ferment.

Referring to the “very tough constraints of economic austerity”, the leader of the Church in Dublin still described it as “a great moment in history to be an educator in Ireland.”

The European Committee for Catholic Education represents 30,500 schools and 7.5 million pupils across Europe.

The Archbishop said this ferment challenged Catholic education to define more clearly what its aims are.

“We are going through a period of ferment in Irish education policy. Ferment is good,” he said and added, “There is in motion a movement which is looking at grassroots renewal of education, in a manner which reflects our changing culture.”

He said the question facing Catholic or denominational or religious education is one of the key questions of a changing and more pluralist Ireland.

“This is not a reason for fear and anxiety, if those of us who are really convinced of the value of Catholic education can present that value in a manner which convinces and elicits support within Irish society,” he commented.

Rather, it is about the type of stimulating but robust dialogue between faith and culture – the original purpose of the Church.

“It is a logic which challenges us to turn away any sense of a self-centred and self-referential culture,” he said.

Defining some of the aims for Catholic education, the Archbishop, who is patron of schools and president of third level colleges such as Mater Dei, said it must produce graduates whose understanding of personal success is not focused on possession or power.

Rather, it must produce young men and women who are capable of leadership and who are not afraid to think and dream about idealism and generosity and solidarity.

Acknowledging that education in the faith is not easy in today’s world, he said “we can feel saddened by what at times appears as a failure in our ability to win the hearts of young people.”

But he said Catholic educators should never give in to resignation or be disheartened in the face of criticism.

Speaking on the feast day of Pope John XXIII, and the day on which the Second Vatican Council opened, Archbishop Martin said the late Pope was a man who never lost a sense of trust in the Lord and in the Church and in the ability – under the guidance of the Spirit – to bring change and reform and renewal to the Church.

He recalled that Blessed John XXIII’s homily at the opening of the Council began with the words Gaudet Mater Ecclesia: Our Mother the Church rejoices.

“He spoke about the Church looking to the future without fear,” the Archbishop recalled but noted that Pope John was well aware of the fact that, at that moment, not everyone was in the mood to rejoice.

He quoted from a paragraph of the late Pope’s homily, which he said was still valid today:

“In the daily exercise of our pastoral office, we sometimes have to listen, much to our regret, to voices of persons who, though burning with zeal, are not endowed with too much sense of discretion or measure. In these modern times they can see nothing but prevarication and ruin. They say that our era, in comparison with past eras, is getting worse and they behave as though they had learned nothing from history, which is, none the less, the teacher of life… We feel we must disagree with those prophets of gloom, who are always forecasting disaster, as though the end of the world was at hand.”