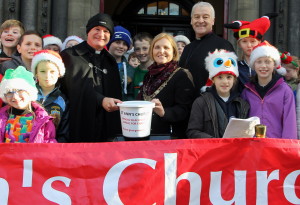 One of the traditional sights on the streets of the capital at Christmas – the Black Santa appeal – was officially launched on Thursday by the Lord Mayor of Dublin, Críona Ní Dhálaigh, and Archbishop of Dublin, Dr Michael Jackson.

More than 60 pupils of Kildare Place National School, directed by their principal Ian Packham, provided festive music for the launch which aims to raise money for charities such as Trust, The Salvation Army, The Simon Community and the Peter McVerry Trust.

Last year over €30,000 was distributed to these charities, which all work with the homeless, as well as other charities including Protestant Aid, Barnardos, St Vincent De Paul, the Laura Lynn Foundation and Solas Project.

The Vicar of St Ann’s, Canon David Gillespie, with assistance of staff and volunteers from the parish and clerical colleagues will be collecting for the appeal outside the church on Dawson Street in Dublin from 10am to 6pm every day up to and including Christmas Eve.

Every cent of the money collected goes to charity.

Commenting on the appeal Canon Gillespie said, “This is my seventh year to lead the Black Santa Appeal and each year I am astonished by the generosity people show. They donate knowing that every cent that we collect is handed over to the charities.

“Standing on the busy street we meet people from all walks of life who are keen to do what they can to support those less well off. It is a very humbling thing to act as a channel for people’s good will and generosity.”

The Vicar thanked those in St Ann’s who will help organise what is a massive undertaking in terms of extending hospitality to the choirs who will sing outside the church.

“There is a small but very faithful team of people working behind the scenes in St Ann’s preparing food, counting money, and liaising with the many choirs who participate and to them I want to express my sincere thanks. We are all busy at this time of the year and the fact that parishioners from St Ann’s are willing to set that time aside and help is very gratifying indeed.”

The money raised by the appeal will be distributed at a special service in St Ann’s Church on Sunday 17 February 2016 when the preacher will be the Archdeacon of Dublin, Venerable David Pierpoint.

The Black Santa sit out is modeled on a similar appeal, which has been run by successive Deans of St Anne’s Cathedral in Belfast for many years.

It became known as the Black Santa appeal because of the long heavy black cloaks worn by the clergy to keep out the cold.

This is the 15th year that the appeal has been held in Dublin and in that time over €500,000 has been raised for local good causes.

While the official launch of the 2015 sit out took place today, collectors have been on the street since Tuesday. The appeal is off to a promising start with over €5,000 donated in the first two days.