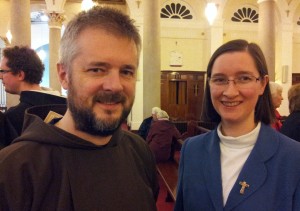 Capuchin friar Fr Bryan Shortall and Sr Louise O’Rourke, PDDM and Assistant Vicar for Religious in the diocese of Dublin, at a prayer service in St Pius X Church Templeogue to mark the opening of the Year of Consecrated Life.

Up to 1,000 Religious priests, nuns and brothers joined Archbishop Diarmuid Martin for a prayer service to launch the opening of the Year of Consecrated Life in Dublin on Saturday evening.

Speaking at the close of the ceremony, the Archbishop told the congregation, “We go into this Year for Consecrated Life aware of our own failings and aware of our weaknesses – but we should come away with the conviction that our life as individuals and as communities brings something to our Church and our world which is needed more than ever in today’s world.”

Archbishop Martin said one of the things he intended to do for the special year was to invite every parish in Dublin to invite the religious within that parish to come on one Sunday during the year to be thanked by the people of the parish.

Addressing the assembled members of the religious orders in St Pius X Church in Templogue, he appealed to them: “I would ask you to become involved in your parishes wherever you are. You are more than welcome to help in the parish – don’t think that you have nothing to offer – you really do,” he affirmed.

Speaking after the ceremony, Sr Elizabeth Cotter IBVM, the vicar for religious in the archdiocese of Dublin told CatholicIreland.net that “a particular aim” for the year is for religious to support parish clergy working with lay people.

“Evangelisation is about all of us working together. Religious are going to try to focus on involving and engaging with whatever parish connections we have,” she explained.

“If you look at parishes in the diocese you will see many religious involved – from parish Sisters or women religious, members of pastoral teams who could be Brothers or Fathers and a lot of the social services such as visiting of people and baptism and funerals programmes – there are religious involved in all of those.”

“But one of the things that has happened in the last few years – since all the abuse revelations – is that religious have become invisible.”

“We are hoping to reclaim who we are and get involved and reach out to our parish clergy. That is particularly important because in many parishes, priests are on their own and they need the support.”

The Year for Consecrated Life will see another large gathering of religious in Dublin in February 2015 for the celebration of the feast of consecrated life.

According to Sr Elizabeth Cotter, there will also be gatherings organised for different forms of religious life at different times over the year and one-off events like a forthcoming canon law workshop for leaders.

In June 2015, a pilgrimage will be undertaken in which participants will visit some of the churches where religious are ministering in the parishes of the diocese.

Speaking to CatholicIreland.net on Saturday, Capuchin Fr Bryan Shortall said he was “very moved” by the prayer service, which was prepared by the Chaplaincy Students of Mater Dei Institute of Education while the music was prepared by the Dublin Diocesan Music Group.

“I saw older religious and I saw younger religious – this is a real moment of joy and seeds of hope are being sewn. What is even more encouraging is that it is not just diocesan-wide or Ireland-wide – this is worldwide,” the Capuchin friar said.

Of his own vocation story, he said, “I am very honoured and very excited to be a religious. I am 26 years in religious life now. I joined in 1987 and 26 years later it is still as exciting and still as powerful to be part of the religious life in Ireland today – I do see great hope for the future – I mean that.”

Sr Louise O’Rourke, PDDM, is a Disciple of the Divine Master and the assistant vicar for religious in the archdiocese of Dublin.

She said there was definitely new shoots emerging. “I belong to a group called ‘Religious in Formation’ and we met about three weeks ago and there were about 60 of us in formation, in the initial stages and just recently professed.”

She said younger religious were very conscious that “we are building on the foundations that our brothers and sisters before us have put down and we are very grateful for the sacrifices that they have made throughout the years.”

Describing it as “a very exciting time” to be a religious, she said Pope Francis “has given us a mission to wake up the world – so I think we need to think creatively how we can do that.”

“We need to remind the world that religious life is still a very credible option and way of life – to decide and chose Christ.”

Fr Bryan Shortall added that Pope Francis had also urged the religious to make noise. “We are making a lot of noise here today – a joyful noise – and I believe in many ways that is going to spill over and with the help of God it will continue to fan that flame.”

In his address during the prayer service, Archbishop Martin told the congregation that “religious life is only authentic when it is marked by humility.”

He added that the work of religious as individuals or communities is destroyed when it is “coloured by even the smallest taste of arrogance or sense of self-superiority.”

Elsewhere he asked if religious recognise that all life is gift – “how could we exploit or abuse another human being or use them for anything other than God’s plan?”

“In a world where so many seek fulfilment in success, possessions and power, we need the sign of religious life” as a witness to the fact that “real human fulfilment is not just in self-fulfilment but in self-giving and service”.

He said the Year of Consecrated Life is about celebrating the humility of many religious who serve men, women and children locked in poverty without fanfare or slick publicity campaigns.

The Archbishop recalled a letter sent to him by a young man who had been abused in a religious-run institution in Ireland.

Concluding his address, the Archbishop said Pope Francis had concluded the Synod on the Family in Rome by warning people against the temptation of not allowing themselves to be surprised by God but instead seeking to remain within the certainty they know.

He urged them never to give in to cynicism or mediocrity and said the Holy Spirit can kindle anew even from the tiniest remnant spark.