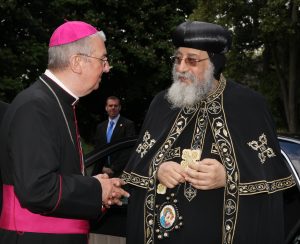 The Church of Ireland Primate, Archbishop Michael Jackson of Dublin, has expressed his solidarity with the Coptic Church in Egypt following the latest deadly attack.

Last Friday (26 May), 29 Christians were killed when masked gunmen opened fire on the bus in which they were travelling. A further 24 people were injured in the attack in the Minya region. The pilgrims were visiting the monastery of Saint Samuel the Confessor.

Daesh claimed responsibility for the atrocity.

In a statement, Archbishop Jackson, who is a member of the Anglican Oriental Orthodox International Commission and will be hosting its meeting in Dublin in October 2017, expressed his “sadness and sorrow” to Pope Tawadros II and to all Coptic Christians.

He recalled his recent meeting and worship with members of the Coptic Orthodox Community in Ireland just ten days ago at the dedication of a new church in the Coptic tradition in Drumcondra in Dublin.

“I have spent the last two days in Jerusalem with the Lord Mayor of Dublin and members of his staff team. We have had a range of in-depth consultations and discussions with members of three World Faiths. It has become increasingly clear to us that respect for human life is sacrosanct and that it lies at the base of political life, dialogue and civil society,” Dr Jackson said.

“I wish to add my sympathy to that of others for those who mourn the loss of those whom they love and cherish in the most recent tragedy. As I pray for the Copts in Egypt and around the world, my prayer is also that God will turn to good the hearts of those who are their murderers.”

The Church of Ireland Primate of All Ireland, Archbishop Richard Clarke, said in a statement that it was “tragic that Coptic Christians in Egypt have increasingly become targets, with four brutal massacres since last December, including attacks on churches on Palm Sunday.

The Vatican’s Secretary of State, Cardinal Pietro Parolin, sent a telegram of condolence in the Pope’s name to Egyptian President Abdel Fattah el-Sisi following the attack.

In his message, Cardinal Parolin wrote the day after the attack that Pope Francis was “Deeply saddened to learn of the barbaric attack in central Egypt and of the tragic loss of life and injury caused by this senseless act of hatred.”

The Pope expressed his “heartfelt solidarity with all those affected by this violent outrage.” He added that he was mindful in a particular way of those children who had lost their lives.

“His Holiness commends the souls of the deceased to the mercy of the Almighty. He assures their grieving families and all who have been injured of his ardent prayers, and he pledges his continued intercession for peace and reconciliation throughout the nation.”

In a statement issued following the terrorist attack, Bishop Angaelos, General Bishop of the Coptic Orthodox Church in the United Kingdom, said “Once again, we find ourselves experiencing pain before which words seem insufficient.”

He said he felt a need to address those who perpetrate terrorism in Egypt and elsewhere and told them, “You are loved. The violent and deadly crimes you perpetrate are abhorrent and detestable, but YOU are loved.”

He also told them that they are loved by him and millions like him “because I, and we, believe in transformation”.

Bishop Angaelos said he grieved for those who have lost their lives, for those who mourn, and for those who will continue to be adversely affected by these tragic experiences; “but I also grieve for a young man who sees it not only justifiable, but glorious, to take the lives of other young men and women, and deprive his and their families of enjoying them as they grow and mature.

“No family should lose a son in this way, even if they are partially or wholly responsible for his flawed ideology.”

He concluded by stating, “In the same way, no family deserves to lose children and members who merely go about their day to enjoy their God-given right to exist, whether it be by attending a concert, taking a pilgrimage to a monastery, simply walking through city streets, or in any other way.” 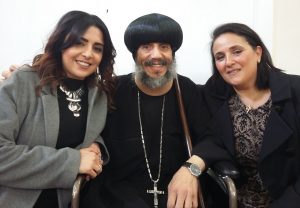 Bishop Antony of the Diocese of Ireland, Scotland and North East England spoke to CatholicIreland.net when he was in Dublin recently for the visit of Pope Tawadros II.

The diocese was established in 1995 and currently encompasses 300 families.

Discussing the growing Coptic community in Ireland, Bishop Antony said this was not so much because of persecution but due to work opportunities. “Some would have come to Ireland from Italy where the financial situation is slower.”

He also underlined that “Not all Copts are Egyptian” and that in Ireland and Britain the Church ministers to those in mixed marriages.

Based in Newcastle, the 63-year-old said there were about 38 Coptic churches in Britain in total.

Asked about the persecution of Christians in Egypt, he said it was “fanatics” who were to blame and that they targeted not just “Coptic people but military, police and others”.

Asked about any hope for the future, he said “persecution is the seed of the faith” and he also expressed the hope that relations between the Christian Churches were very close.

“But we need more dialogue and more study; we need to be together for praise and liturgy and to receive communion together,” he said.

Bishop Antony is originally from Cairo, where he studied civil engineering, graduating in 1977.

After three years’ national service, he joined the monastery and became a monk in 1981. Pope Shenouda ordained him as a priest in 1984.