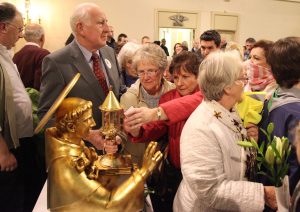 Archbishop Diarmuid Martin of Dublin expressed concern at the “total loss of respect for life” among gangland criminals peddling fear on the streets of the capital.

At a Mass on Tuesday at St Mary’s Pro Cathedral, which lies in the part of the capital worst affected by the Kinahan-Hutch feud, the Archbishop criticised “unscrupulous people” who feel that “their financial supremacy can authorise them to take life through violence and exploitation”.

One of the themes of his homily was ‘loss’ which he tied in with the visit of the relics of St Anthony of Padua, who is known in popular devotion for helping people find lost things.

He said many today find it difficult to find God because they are trapped in other alternatives, whether of their own making or because of a broader a culture which finds no need for God.

“We will never break into a culture of worldliness and possession and celebrity, if we approach people with many of the same attitudes of worldliness,” he warned.

“In many ways we have lost our missionary zeal and we are happy when people come to Jesus only in superficial way. If we have no sense of there being something missing in our lives, then we will never set out on the path of trying to find out what we have really lost,” he said.

Referring to the popular devotion to St Anthony as the Saint who helps people to find lost things, Archbishop Martin admitted, “I can tell you that at least in my case he is regularly called to work overtime.”

But he also stressed that there are so many other forms of loss in people’s lives.

There is the genuine sense of human loss of someone who is bereaved or who lose confidence in themselves or in their willingness to live.

There is a sense of loss of hope caused by the harshness of our society either through the consequences of the economic crisis or simply the lack of a sense of solidarity and care, he stressed.

He added that people who have lost even the essentials in life like home or employment can then feel even more lost and abandoned by society.

“We have to ask ourselves as individuals and as a Church community where do we stand in responding to those who find themselves lost in our culture?”

“We have to ask ourselves if we have crafted our Church life as a space where people who suffer loss really feel that they may find welcome.”

“Do our Church communities reach out adequately to those who are on the various peripheries of society?”

Throughout the day, thousands of devotees poured into the Dublin church to venerate the relics, though the crowds were sparser in the evening as the Saint was no match for the popularity of the Irish soccer squad.

Anthony Quinn and his wife Philomena from Kildare were among over 1,500 people who attended the early Mass in the Pro Cathedral celebrated by Canon Damian O’Reilly.

The couple told CatholicIreland.net that they had made the effort to travel the distance to venerate the relics because they were devotees.

“My birthday is 13 June, St Anthony’s feast-day, so that is one of the reasons we are here,” 62 year old Anthony Quinn explained. They had also named their son Anthony too.

Philomena said her devotion had been handed down from her mother and it was sealed by meeting Anthony.

“St Anthony definitely played a role in keeping us together – we have lost both of our kids, so I have prayed to him and we’re here today,” she explained through tears.

Their daughter Siobhan died at just six through illness and their son Anthony was killed in a car crash when in was 23 in 2000.

Despite their tragedy, Anthony explained that he and Philomena remained close and were a great support to each other.

Dr Sharon Lyons, who was cantor and violinist at the two Masses in the Pro Cathedral recalled that as part of a Dublin diocesan event she had travelled to Padua a number of years ago and visited the basilica there with the diocesan music group.

“I would have come from a background where my Granny would have had a very strong devotion to St Anthony – so we were brought up constantly praying to him and sent down to the church to give an offering for lost objects, lost hope and lost faith,” the 33 year old musician explained.

She told CatholicIreland.net that while some of her friends might not attend church, knowledge of St Anthony was “ingrained in us” and “still resonates” with her generation.

Maynooth Professor Emeritus, Dr Gerard Gillen, who was organist at the lunchtime Mass at the Pro Cathedral described the ceremony and huge turn out as “a very moving occasion” because “it brought me back to the very beginnings of my musical career when I began as a very young pre-teen organist in the Church of Adam and Eve, the Franciscan church on Merchant’s Quay.”

He said the weekly devotion on Tuesdays then to St Anthony remained “very vivid in my memory”.

The sight of a teeming congregation he added was a very rare sight today and only happened maybe at Christmastime.

In his homily, Canon Damian O’Reilly remembered “those who have lost hope in our world today” of fragile peace and broken promises – “a world which very often sees the dishonest person as a success and the honest person as an easy pushover”.

He also prayed for those who find themselves in despair and at the end of their tether would find hope.

“That those who have lost love, perhaps the love of a dear one, and for those who are suffering in the context of broken relationships – for those whose hearts are crying out for love.”

He appealed to the packed church to “pray for our country today, that we may hold dearly to the Gospel of Christ, that we may cherish the gift of life from the very moment of conception to its natural ending.”