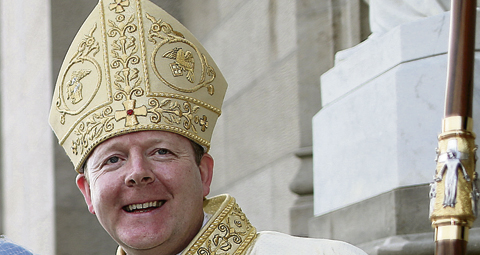 The future leader of the Catholic Church in Ireland has said he remains hopeful about Northern Ireland’s peace process, despite the failure of politicians to agree a deal under the Haass initiative.

Describing himself as a “realistic optimist”, Archbishop Eamon Martin said on Monday night that as a Christian, he believes “profoundly that good will ultimately prevail in all things and that a better future is always possible.”

Addressing the Ballymena Borough Church Members Forum, the successor of Cardinal Brady said, “I believe that following the example of Jesus Christ and in the power of the Holy Spirit, each of us is capable of moving beyond our fears, hurts, memories” and help imagine and build a healed and reconciled future.

But he warned that the journey to a brighter and more prosperous future would be challenging.  “It will be marked by starts and stops, by successes and failure. In short, I expect it to mirror the Way of the Cross by which all human healing, redemption, and reconciliation is ultimately wrought.”

Elsewhere in his address, Archbishop Martin said the failure of Northern Ireland’s politicians to broker an agreement under the recent Haass talks has not been cost free.

He said the rejection of the proposals of Dr Haass – a man of such international standing and integrity –  had damaged Northern Ireland’s reputation internationally. The Archbishop said it had also damaged prospects for inward investment.

Speaking alongside Dr Heather Morris, President of the Methodist Church in Ireland, Dr Martin said confidence in the ability of politics to resolve difficult problems had been undermined.

“Trust between the parties and even between whole communities is again being put under strain,” he warned and added that it would take “courageous and creative leadership to move things forward.”

The Archbishop said Northern Ireland needed leadership that had enough self-belief and commitment to the greater good that it would look beyond the next election or party-political interests.

He warned against the pride which wrapped people up in self-righteousness and binds people “rigidly” to their own narrative and backed people into “impossible corners”.

“I am not naïve about the complexity and sensitivity of finding a way through the difficulties that lie ahead. But I am resolute in rejecting the horror of our past with its lies and violence that doomed so many of our youth,” the Derry-born prelate said.

He added that he remained hopeful with regard to the “peace process”.