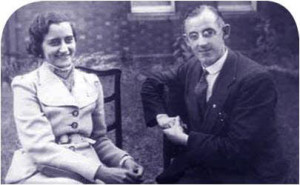 Frank Duff and Mary Everett, Vice-President of the Senatus of India in 1936.

Archbishop Diarmuid Martin of Dublin will this Sunday bless and dedicate a room at the Dublin parish of St Peter’s in Phibsborough in honour of the Legion of Mary founder, Frank Duff.

The room will contain items and images commemorating Frank Duff’s life and achievements.

The ceremony is being hosted by the Vincentian Community and the Parish Council of St Peter’s and follows 11.30am Mass with the Archbishop.

Frank Duff was born in Phibsborough in 1889, the eldest of seven children. The ‘Frank Duff Room’ is a memorial and celebration of the connection between the Servant of God, St Peter’s Church and the Vincentian Community.

Frank Duff attended Blackrock College. In 1908, he joined the Civil Service, and was assigned to the Irish Land Commission.

Six years later, aged 24, he joined the Society of St Vincent de Paul, and he saw first-hand the abject poverty in Dublin of the time.

In 1916, aged 27, Frank Duff published his first pamphlet, ‘Can we be Saints?’, in which he expressed the conviction that all without exception are called to be saints, and that through Christian faith all persons have available the means necessary to attain such sainthood.

In 1924, he was transferred to the Department of Finance. He would eventually retire from the Civil Service in 1934 to devote all of his time to the Legion of Mary.

Inspired by St Louis de Montfort’s True Devotion to Mary, he founded the Legion of Mary, along with a group of Catholic women and Fr Michael Toher, a priest of the Dublin Archdiocese.

The first branch of what was to become the first praesidium of the Legion of Mary was formed on 7 September 1921.

This lay apostolic organisation had a twofold purpose, first of all the spiritual development of its members and secondly advancing the reign of Christ through Mary.

The first legionaries were women.

Today, the Legion of Mary has an estimated four million active members and 10 million auxiliary members in over 180 countries.

Frank Duff died at 91 on 7 November 1980 in Dublin. He was interred in Glasnevin Cemetery. 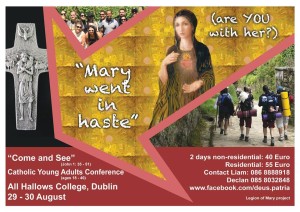 In July 1996, his Cause for canonisation was introduced by the Archbishop of Dublin, Cardinal Desmond Connell.

Separately, the 14th All Ireland Catholic Young Adults Conference will be held in All Hallows College in Dublin on the weekend of 29-30 August.

The conference invites young adults to learn, share and discuss together their faith with prominent figures from the Catholic community in Ireland and beyond.

Dominican Fr John Harris will lead our weekend celebration and the line-up of speakers includes the Primate of All Ireland, Archbishop Eamon Martin, who will speak on the theme, ‘Moving in Haste… challenges & opportunities for young adults in the Church today’. This will be followed by a Q&A session.

Workshops on 29 August include:

– 1916… what inspired the Capuchin Response?

– Computer use and prayer life…. is there a potential conflict?

– What is a soul and why should we bother saving one?

– New age and the occult… do we really know what we’re dealing with?