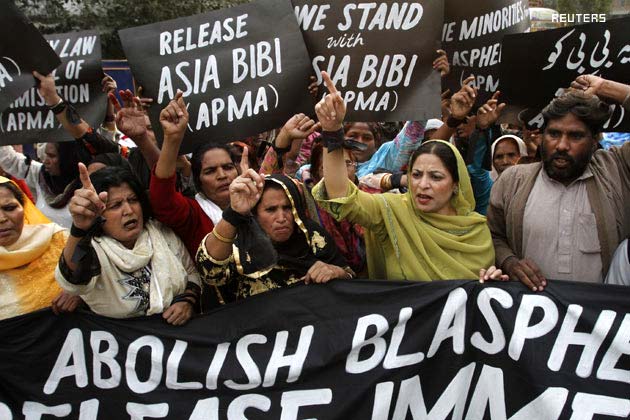 After two postponements, the appeal for Asia Bibi, a Christian woman unjustly accused and sentenced to death for blasphemy opens today Wednesday 26 March.

Christian lawyer Naeem Shakir, who heads up her defence team, is attempting to prove that “the charges against her have always been false”.

The trial has been postponed twice and the Court administration has been on strike recently, but the lawyer says he has “high hopes” for Wednesday’s hearing.

He said Asia Bibi is in the women’s prison in Multan “in good health and strictly guarded for security reasons. The woman prays and hopes”, he explained.

Asia Bibi has been in prison now for four years.

A working group of the European Parliament on freedom of religion wrote on 19 March: “We welcome the decision of the Lahore High Court to initiate the trial appeal for Asia Bibi. We note with regret that, in two hearings, the judges were on leave.”

“We trust that the judges appointed are present for the third hearing.”

“We call on all those involved in the case to show courage and not to give in to any pressure or external threat.”

“We ask the government of Pakistan to safeguard the independence and effective functioning of the Lahore High Court. In addition, we urge the Pakistani authorities to provide adequate protection for all persons involved in the case, now and after a possible, future judicial decision.”

“The group will continue to follow this case closely, as well as other cases involving the blasphemy laws in Pakistan that the European Parliament calls to reform, in order to avoid abuse, or repeal.”

The first hearing of the appeal trial of Asia Bibi Noreen, which was scheduled for Monday 17 March, in front of the High Court in Lahore, was postponed due to the absence of one of the judges.

But Christian lawyer, Naeem Shakir, head of the defence team said he was convinced Asia has “a good chance for a full acquittal”.

In June 2009, Asia was involved in an argument with a group of Muslim women with whom she had been harvesting berries, after the other women became angry at her for drinking the same water as them.

She was subsequently accused of insulting the Prophet Muhammad, a charge she denies, and was arrested and imprisoned.

In November 2010, a Sheikhupura judge sentenced her to death. If executed, Asia would be the first woman in Pakistan to be lawfully killed for blasphemy.

The verdict, which was reached in a district court and would need to be upheld by a superior court, received worldwide attention.

Various petitions, including one that received 400,000 signatures, were organized to protest Asia’s imprisonment, and Pope Benedict XVI publicly called for the charges against her to be dismissed.

She received less sympathy from her neighbours and Islamic religious leaders in the country, some of whom adamantly called for her to be executed.

Christian minorities minister, Shahbaz Bhatti, and Pakistani government politician, Salmaan Taseer, were both killed for advocating on her behalf and opposing the blasphemy laws.

Asia’s family has gone into hiding due to receiving death threats and has voiced concerns that she could be killed by extremists if released from prison.

Commenting on the case, Dominican Fr James Channan OP, Director of the Peace Centre in Lahore, involved in interreligious dialogue and in works of social and pastoral character said “If judges apply the principles of justice and act without bias, Asia Bibi will be declared innocent and released.”

“We cherish hopes because, in the past, when blasphemy cases reached the High Court, justice was not carried out and the accused were acquitted, stating that it was a false or instrumental accusation.”

“The courts of first instance are more inclined to pressure from fundamentalists” he explained.

“But when these cases reach the High Court often these methods do not work, and this is a good thing. Unfortunately in the past honest judges paid with their lives. We want a fair and transparent trial”.

“Asia Bibi has become a symbol of persecution and how the blasphemy law is abused, with unfounded accusations,” Fr James Channan commented.

“Today, her case has become the centre of attention of the government, NGOs and activists for human rights, the international community and Churches. Also Muslim Ong, that defend the rights of women in Pakistan, have expressed themselves in her favour”.