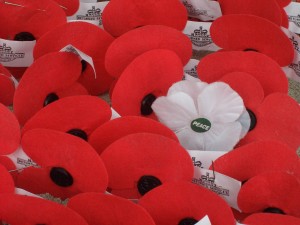 In his homily, Revd Michael Roemmele, who formerly served as a Chaplain to the British Forces, and is now a rector in Camus–Juxta–Bann in the Diocese of Derry, said the tragedy of war and military action is the denial of the sanctity life.

“Human life becomes cheap, military objectives, all important. The enormity of the losses in the First World War is beyond our ability to comprehend. Numbers numb our humanity.”

He said they make people blind and insensitive to the human suffering caused by conflict.

“The awful loss of thousands of lives  daily between 1914 and 1918, like the massacre of 6 million Jews, and the casualties of the blitz in World War II did not shock the world into laying down arms, or bring about peace, but rather the contrary.”

He said one lesson from the history of conflict is that violence breeds violence with a self–perpetuating momentum.

“It took the Armageddon–like destruction of Hiroshima on 6 August 1945 and the instant annihilation of 100,000 innocent citizens, to make the Japanese capitulate and break that cycle of violence in a way that horrified the world. But that was exceptional. Very rarely are wars brought to an end by force of arms or by military might, but rather by negotiation and through political settlement.”

Revd Roemmele said just occasionally one individual has woken the world’s conscience to the horrors of warfare in a way that led to change.

He cited the 1976 Time magazine photograph of Kim Phuc, a screaming badly burned 8 year old Vietnamese girl who had torn off her blazing clothes and was running naked on the road from her village which had been devastated by a napalm bomb.

“Her picture showed the brutality of the Vietnam War as never before. It shocked the conscience of the world.”

More recently, he said, the world has turned a blind eye to the conflict in Syria and paid little heed to the plight of the millions forced to flee their homes, or to the hundreds of thousands who this year have made a perilous journey to the borders of Europe.

“Last week there was just a brief mention on a news bulletin of 20 Syrian refugee children who were drowned on yet another ill–fated Mediterranean boat crossing. It is as if the statistics and numbers mean nothing.”

However, the sight of the lifeless body of one individual child being carried out of the waves and the grief on his father’s face and the naming of that three year old brought the world to its senses this summer.

The death of little Aylan Kurdi moved nations to tears and awakened compassion in a way that statistics and numbers had never done before, or since.

“The death of that little boy was the catalyst which inspired politicians to sit around a table and start working together to find ways of bringing an end to this senseless loss of the innocent, so often dehumanised by the term ‘collateral damage.’ They are the real victims of today’s wars and they need to be remembered by name, not by numbers.”

Revd Roemmele told the packed cathedral that in the annual services of remembrance “we rightly remember the members of the armed forces who died in war. Their stories need to be told and their names recalled. They do deserve to be remembered by their nations, and before God.”

He underlined that there is not village, or town in any county in Ireland that did not suffer losses in that war.

“From County Donegal alone there were almost 600 who died. On my desk is a book which gives all their names and many of their stories.”

“A sad element of our island’s history is that different mythologies of the 1st World War have contributed to  the deep divisions that have festered within Ireland ever since.”

“If we are to truly honour our Lord and his supreme sacrifice, our fellow countrymen and all whose lives were sacrificed in the Great War, or indeed in  any war, what better thing could we do than stand side by side next year as we commemorate the Battle of the Somme and the events which happened here in Ireland 100 years ago?”

Wreaths were laid on Sunday at the War Memorial in the North Transept of St Patrick’s Cathedral by President Higgins and the President of the Royal British Legion’s Republic of Ireland Branch, during the service.

The service was attended by the Lord Mayor of Dublin, the Tánaiste, the Minister for Arts, Heritage & the Gaeltacht, the Ceann Comhairle, the Cathoirleach, Justice Bernard Barton representing the judiciary, members of the Diplomatic Corps, representatives of the Defence Forces, and the President of the GAA.