Home > News > Annual Intercession for Priests begins in All Hallows

Annual Intercession for Priests begins in All Hallows 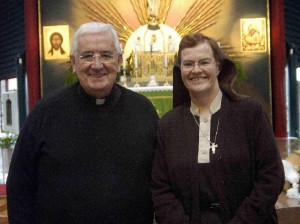 The annual Intercession for Priests began on Monday at All Hallows College and will continue until the end of August.

This ministry to priests was begun by Vincentian Fr Kevin Scallon CM along with 11 other priests and Sr Briege McKenna OSC on the feast of Our Lady of Mount Carmel 16 July 1976 in Dublin.

Recalling the reasons for founding this ministry, Fr Kevin Scallon has written, “I began the Intercession for Priests out of a great concern I experienced while working as spiritual director at All Hallows College during the early 1970s. Reports kept coming back about alumni who were leaving the priesthood, sometimes after only a few years in the ministry.”

“The question was, what could be done and, while much was said about it, it seemed there was little anyone could do.”

“In 1974, I had heard of a movement in the US called Intercession for Priests. I was struck by this idea and said to myself: ‘Yes, at least we could pray for the spiritual renewal of the priesthood.’ It was about that time that I had a sudden and very significant conversion experience of the reality of Christ in my own life which greatly affected my interior life and my priestly ministry.”

“So it was that in 1976 with Fr Myles Rearden CM I planned to hold the first Intercession for Priests hardly knowing what I was doing.”

From Ireland the Intercession for Priests has spread to England, Scotland, France, Australia, Papua New Guinea, Nigeria, the Philippines, and the United States.

The team running the Intercession pray for priests to be full of the love of Jesus Christ and secure in their identity and vocation; they also pray in thanksgiving for faithful priests and for those who are persecuted and imprisoned, rejected and poor.

This year’s retreat will be addressed in week 1 by Cathy Brenti on the theme “So faith comes from what is heard, and what is heard comes by the preaching of Christ.” (Romans 10:17)

The French mother of three was baptised into the Calvinist Reformed Church of France, the daughter of a Jewish father who became a Protestant in a camp during WWII. Her Catholic mother had to deny her faith to get married.

She is married Claude who became a permanent deacon in 1988. They are parents of three sons, the eldest is 33 and a priest, the next is 30 and head of IKEA Novosibirsk in Siberia, and the youngest is a 23-year-old student of Business Law at the Sorbonne University in Paris.

In 1980, Cathy and her husband Claude joined the Catholic Church, a year after their eldest son had been baptised a Catholic, though his parents and godparents were all Protestants.

She and Claude are members of the Beatitudes New Community since 1978. Claude is presently General Moderator for the ‘lay branch’ of the Community.

An interpreter for English, Spanish and Italian, Cathy works part time for the Beatitudes publishing house, as head of the department of Foreign Literature.

Cathy was member of the ICCRS (International Catholic Charismatic Renewal Services) Council for nine years (1996-2005) and vice-president for two years.

She has travelled and spoken in all parts of the world either for ICCRS or the Beatitudes New Community on life in the Spirit, charisms, leaders’ formation and she also gives mothers’ retreats twice a year. She has a special call of prayer, as a mother, for priests. 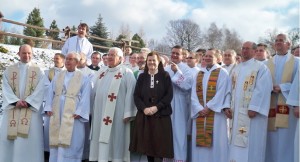 The second week of the retreat will include the National Day of Prayer for Priests, Knock Shrine, Co Mayo on 12 August.

The third week will be addressed by Fr Jeff Bayhi on the theme “How beautiful are the feet of those who bring good news” (Isaiah 52:7)

Fr Jeff Bayhi was ordained a priest for the Diocese of Baton Rouge, Louisiana in 1979. He received his degree in Psychology, his Masters of Divinity, and his Doctorate in Pastoral Counselling. Fr. Jeff has been a pastor for many years and has been involved in various ministries including retreats and television media.