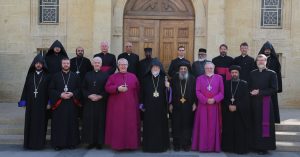 The Anglican Primate of Ireland has said he is looking forward to welcoming the Anglican Oriental-Orthodox International Commission to Dublin next week when they will meet in Ireland for the first time since the Commission’s foundation.

The meeting from 23 to 28 October will bring together representatives of the Church of Ireland and Church of England, as well as the Church of Jerusalem and the Middle East, and the Anglican Church of Canada.

The meeting will be hosted by Archbishop Dr Michael Jackson of Dublin, who is one of the founding members of the Commission.

This will be the sixth meeting of the Commission since its foundation in 2001.

The Commission will consider two main items. The first is the completion of an agreed text on the Holy Spirit that will be linked with the mission of the Church. It is hoped that the agreed statement will be completed and signed by the two co-chairs in the course of the meeting.

The second agenda item is an initial exploration of areas around “authority in the Church”.

In a statement, Archbishop Jackson said, “These Oriental Orthodox Churches are firmly rooted in the Middle East and are amongst the oldest church families in the world today. When the Syrian Orthodox Church meets in prayer, they do so in Aramaic, the language of Jesus and the early Apostolic church.

“Their congregations number in the millions and with their visit we are reminded of challenges facing Christians in the Middle East and that more than half the Anglican provinces worldwide are facing persecution or are post-conflict or in actual conflict.

“The Coptic Orthodox Church often endures terrorist attacks in Egypt and Christian communities across Iraq and Syria have undergone great hardships as some seek to uproot these ancient communities.”

While in Dublin, members will attend St Maximus and St Domatius Coptic Orthodox Church in Drumcondra for prayers in the Coptic tradition.

They will also visit the Chester Beatty Library, Saint Patrick’s Cathedral, Marsh’s Library, and the Book of Kells in Trinity College. They will attend Choral Evensong and a reception in Christ Church Cathedral hosted by Dean Dermot Dunne and a reception in the Mansion House to meet the Ardmhéara Bhaile Átha Cliath/Lord Mayor of Dublin Mícheál Mac Donncha and leaders of other faiths in Ireland and members of inter faith groups.

Archbishop Jackson said he hoped the Commission would see that there is “a spiritual core and a religious dynamic to Dublin historically and in lived actuality”.

Building on the dialogues between the Oriental Churches and the Eastern Orthodox and Roman Catholic Churches, the Commission quickly produced a draft Agreement on Christology, which is currently being considered by the Churches of the Anglican Communion.

At the Cairo meeting, theologians officially representing the Churches of the Anglican Communion and the Oriental Orthodox Churches made history by signing an agreement on their mutual understanding of Christology: what we believe together about the Person of Jesus Christ; helping to heal one of the oldest continuing divisions within Christianity.

The official dialogue between the Anglican Communion and the Oriental Orthodox Churches reached further agreement on the theological understanding of the Holy Spirit at their fifth meeting in Lebanon in 2016. The Archbishop of Dublin was among the Anglican members of the Commission present.

The Venerable Dr Edward Simonton OGS is the Vicar General and Archdeacon of Quebec, and a member of the Anglican Oriental Orthodox International Commission.

Writing on his blog, he described the work of the Commission as “an act of solidarity with an increasingly persecuted Christian community”.

On the statement reached by the Commission on Christology, Ven Simonton said that for almost thirty years the Anglican Communion and the Oriental Orthodox had been trying to reach an agreed Statement on Christology.

The Orthodox had already come to the same agreement with the Oriental Orthodox which paved the way for this agreed statement.

On 15 October 2014, a Joint Agreed Statement on Christology was signed. “Thus an almost 1600 year division was swept away,” he said.