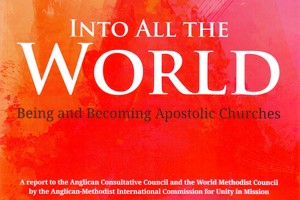 Today will see another step taken towards unity between Methodism and the Anglican Communion at an event to be held in Downpatrick – the burial place of St Patrick.

Archbishop Justin Welby of Canterbury and the World Methodist Vice President, Rev Gillian Kingston from Dublin, jointly launch a publication that aims to overcome centuries of separate ministries by the two Christian traditions.

All The World: Being and Becoming Apostolic Churches is a report written by members of the Anglican-Methodist International Commission on Unity and Mission (AMICUM) and it highlights how Methodists and Anglicans have understood mission.

“It surveys places around the world where there is already active cooperation, and goes on to provide Tool Kits with practical advice for ways to work together,” according to Anglican News.

“This Report is the fruit of some twenty years of honest questions and considered responses, built on trust among the dialogue partners, and a practical ecumenical vision for our common mission,” said Professor Robert Gribben, Methodist Co-Chair of AMICUM.

AMICUM has chosen the location for the launch event to mark the fact that the two Churches had taken concrete steps to inter-changeable ministry.

These included the mutual laying on of hands at the ordination of the Methodist President, and of a Church of Ireland bishop.

The AMICUM report sets out key points of agreement concerning the interchangeability of ordained ministries, and the awareness of each Communion’s need of the other.

“It sees a common, interchangeable ministry as crucial in making the unity of the Church visible,” according to the Anglican Communion news service.

The report analyses the place of the apostolic tradition and the nature of the oversight (episkope) in the life of the Church.

The Methodist Church, founded by John Wesley, started as a reform movement to the 18th century Church of England.

The revival began with John Wesley and his brother Charles who founded a Holy Club at Oxford.

They met weekly and set about living a holy life. The group were branded ‘Methodist’ by their fellow students because they followed a certain methodology in their way of Christian living.

They looked for a return to the Gospel within the Church of England, reaching out to the poor and uneducated at open air rallies and establishing Methodist societies wherever they went.

A number of Anglican clergy joined the group, and after the death of John Wesley, the reform movement split from the Anglican church.

Through the ecumenical movement of the 20th century, Methodism and the Anglican communion have been moving towards unity.