Anger at BBC’s report of Pope’s visit to Auschwitz 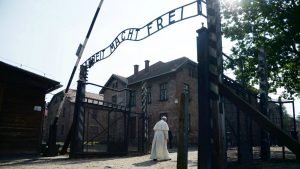 A report broadcast by BBC News on Pope Francis’ visit to Auschwitz on Friday has been heavily criticised by a top Catholic peer in Britain.

Lord David Alton took exception to the BBC report stating that the Pope’s visit was in reparation for the Church’s silence during the Holocaust.

Describing the claim as libel, the Catholic peer highlighted that the visit to the former death camp was part of the Church’s commitment to remembering the Holocaust so that it may never be repeated and that this was a commitment which had been made by previous popes.

In a reflection prompted by the report, David Alton noted that the BBC’s reporter clearly didn’t see the irony of stating that the Catholic Church had remained silent in the face of a genocide only to then describe how Polish Catholics were arrested and killed for sheltering Jews and how Fr Maximilian Kolbe was executed at Auschwitz after taking the place of another prisoner.

“Why was he in Auschwitz in the first place? He had been arrested for publishing a denunciation of the Nazis in his magazine, Knight, which had a circulation of around one million people. Hardly silence, then,” Lord Alton argued.

He also suggested that before they repeat this collective libel against the Church that the BBC should read John Frain’s carefully documented account on the role of Catholics in opposing Hitler and Nazism.

“It records how the Church repeated its denunciation of anti-Semitism and Nazism from 1928 onwards. In that year the Vatican issued a ‘binding condemnation’ of ‘that hate which is now called anti-Semitism’.”

Dr Frain also details the year-by-year condemnations issued by the German bishops, beginning in 1929 with Bishop Johannes Gfollner of Linz warning against “the false prophets” of Nazism and telling the Catholic faithful: “Close your ears and do not join their associations, close your doors and do not let their newspapers into your homes, close your hands and do not support their endeavours in elections.”

In 1930 the Bishop of Mainz declared Nazism and Catholicism to be irreconcilable.

In 1933 [the year that Hitler came to power] the bishops of Cologne, Upper Rhine and Paderborn said they would deny the sacraments to anyone involved in parties hostile to Christianity; and the bishops of Bavaria condemned Nazi racism and their eugenic ideology with its scorn for the sanctity of life of the unborn and its belief in euthanasia.

Even before the Second World War began the Reich had compulsorily sterilised 350,000 people and begun the elimination of what it called “useless eaters”, people possessing “life unworthy of life” – which the Vatican condemned in 1933 as government degenerating into cattle breeding laboratories and in 1940 as “contrary to both the natural and the divine positive law.”

In 1937 Pope Pius XI condemned events in Germany stating: “Seldom has there been a persecution so heavy, so terrifying, so grievous and lamentable in its far-reaching effects. It is a persecution that spares neither force, nor oppression, nor threats, nor even subterfuge of intrigue and the fabrication of false facts.”

In 1938 he said that no Christian could be anti-Semitic because “spiritually, we are all Semites.”

Above all others, the story of Bishop von Galen – the “Lion of Munster” – is one of immense courage and bravery, such that [Hitler’s secretary] Martin Bormann demanded his execution.

Bishop von Galen described the National Socialists as “the hammer” and “we are the anvil” and “the anvil is harder than the hammer.”

He referred to the stories of Erich Klausner, the General Secretary of Germany’s Catholic Action, who was shot dead; Adelbert Prost, Director of the Catholic Youth Sports Association, also murdered; Fritz Gerlich, a Catholic journalist murdered at Dachau  – known as “the priest’s camp” because 2,670 priests from around 20 countries were held there: 600 died at Dachau and another 325 died during “transport of invalids”.

Some stories – those of Blessed Titus Brandsma, St Maximilian Kolbe, and St Edith Stein — are quite well known.

In 1931, there were around 21,000 Catholic priests in Germany and over 8,000 of them, one third, clashed with the Reich and several hundred were eliminated by the Reich.

As Dr Frain once said to me, “How can any of these facts ever be made to sound like complicity?”

Page after page of his book refutes the libel that German bishops were docile or indifferent when confronted with Nazism.

Perhaps the greatest calumny of all concerns the role of Pope Pius XII. Dr Frain describes “the cottage industry” of detractors and their failure to objectively examine the facts. He cites Rabbi David Dalin who describes such books as “bestsellers made out of bad history”.

Rabbi Dalin says that “The truth about Pius XII must be restored. This hijacking of the Holocaust must be repudiated.”

Dalin cites Pinchas Lapide, an historian and Israeli consul, who said that Pius XII “was instrumental in saving at least 700,000, but probably as many as 860,000 Jews from certain death at Nazi hands.” In the context of the 6 million who perished he contrasts this record with the abject failure of others to save the Jews.

In his forensic analysis of the facts Dr Frain details what the Nazis themselves said about Pius – “he has always been hostile to National Socialism”; “Pacelli was the live spirit which stood behind all the anti-German activities of Rome’s policy.” The Nazis described Pius XII as “Jew loving.”

Most telling of all are the recorded comments of the Jews who were contemporaries of Pius XII.

After the War he was thanked by survivors of the Holocaust and tributes included one from Israel’s first President, Chaim Weizmann and Isaac Herzog, Chief Rabbi of Israel. Rome’s Chief Rabbi, Israel Zolli, became a Catholic and took the Pope’s name as a tribute to him.

At the time of his death, in 1958, Golda Meir said, “When fearful martyrdom came to our people in the decade of Nazi terror, the voice of the Pope was raised for the victims.”

The Jewish Chronicle recorded: “Confronted by the monstrous cruelties of Nazism, Fascism and Communism, he repeatedly proclaimed the virtues of humanity and compassion…many hundreds of fugitive Jews found sanctuary in the Vatican by the Nazis. Such actions will always be remembered.”

There is no doubt that the recent attempts to rewrite this history has placed a barrier between closer Catholic-Jewish relations.

This is something which has motivated a New York Jew, Gary Krupp, to found the Pave The Way organisation.

He says that a proper understanding of the history of this period, and the role of Pius XII is crucial because “Pius XII, in just one day, hid 7,000 Jews, from the Nazis”.

Krupp says he “grew up hating Pius.” Having carefully researched the facts Krupp has come to the conclusion that “he was the greatest hero of World War Two. We can prove it. We have something on our side – documented proof – where the revisionists haven’t a scrap of paper to support their theories.”

One of the most telling refutations of Vatican indifference to the rise of Nazism and the appalling events of the Holocaust came from Albert Einstein who had escaped from Nazi Germany. In 1940 he said: “only the Church stood squarely across the path of Hitler’s campaign for suppressing the truth…I am forced thus to confess that what I once despised I now praise unreservedly.”

Those who read this excellent book may not be able to bring themselves to Einstein’s conclusion –  but let us at least examine the whole story rather than endlessly repeat the one we wish to be true.

St Maximilian Kolbe was taken to Auschwitz for writing: “No one in the world can change truth, and beyond the hecatombs of the extermination camps, of what use are the victories on the battlefield if we are defeated in our innermost personal selves”.

Even the BBC can’t change truth – and in a week when we have seen the execution of another Catholic priest perhaps they should think more carefully before casually repeating canards.

Pope Francis on Friday morning paid an emotional visit to the Auschwitz-Birkenau memorial and museum, the site of a Nazi concentration and extermination camp where more than 1.1 million people, the vast majority of whom were Jews, were put to death during the Second World War.

Prior to his visit to the camp, the Pope decided he would not give a speech, saying he preferred to enter alone, in silent prayer. “I would like to go to that place of horror without speeches, without crowds — only the few people necessary,” he explained. “Alone, enter, pray. And may the Lord give me the grace to cry.”

While at Auschwitz, the Pope greeted the prime minister of Poland and 12 Holocaust survivors and prayed silently in the cell where St Maximilian Mary Kolbe was martyred.

Upon leaving the cell, he wrote in a book, “Lord, have mercy on your people! Lord, forgiveness for so much cruelty!”

Pope Francis then traveled to Auschwitz II–Birkenau, the largest of the extermination camps.

After praying, he greeted 25 of the Righteous Among the Nations—persons who have been recognised by Israel for saving Jews during World War II.

At the conclusion of the visit, a rabbi chanted Psalm 130 in Hebrew, and a Holocaust survivor read it in Polish.