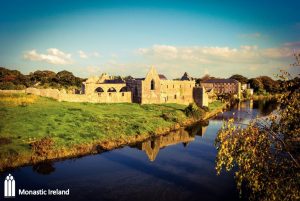 A 600-year-old Co. Limerick abbey which has just undergone extensive renovations as part of a pilot programme by Fáilte Ireland looks set to become a major tourist attraction.

Extensive maintenance works have been carried out at the Franciscan Friary in Askeaton in West Limerick as part of the development of the Shannon Estuary Drive, which connects the estuary with the Wild Atlantic Way.

The Franciscan Friary of Askeaton lies by the River Deel, to the north of the village. While there is some uncertainty as to its establishment, it is believed the friary was founded either in 1389 by Gerald Fitzgerald (1335–98), 3rd Earl of Desmond and Lord Justice of Ireland, or in 1420 by James Fitzgerald (c.1380–1462), 7th Earl of Desmond.

The extensive remains of the friary and its surroundings represent an imposing medieval architectural landscape that was probably planned intentionally in the early 15th century. The friary’s cloister is intact and an image of St Francis was carved into the cloister arcade to remind the Franciscan friars of their patron saint as they went to and from Divine Office.

Among the detailed features are an elaborate sedilia in the south wall, three altar-tombs of similar design, probably built for the Desmond family or other prominent patrons, a Mass dial in the cloister, and a wall painting of Christ as the Man of Sorrows. A medieval wooden statue of the Madonna and Child and three medieval bells from Askeaton are now in the National Museum of Ireland, Dublin.

The Office of Public Works said that the Shannon Estuary Drive is one of the first in a series of drives currently being developed as part of a pilot scheme from Fáilte Ireland which aims to enhance the visitor experience along the Wild Atlantic Way.

The works that have taken place in Askeaton have included new chippings being laid on pathways within the building, and the cloister area has been washed and cleaned. Other works, including a general clean-up up of the entire site, have also been undertaken.