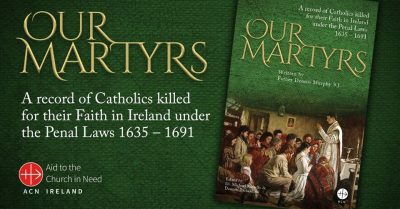 This evening, 29 November, from 6 p.m. at The Legionaries of Christ Faith & Family Centre in Leopardstown, Dublin, Aid to the Church in Need (ACN) Ireland will be hosting the Our Martyrs book launch.

Our Martyrs was originally composed in 1896 by Fr Dennis Murphy SJ and is a record of Catholics killed for their faith in Ireland under the Penal Laws.

Our Martyrs has been edited and prefaced with a short introduction by Dr Michael Kinsella and Damien Richardson. The book launch this evening will start with Holy Mass concelebrated by Fr Pitta Johnson from Nigeria, a place that has been “wracked with persecution and martyrdom of Christians on a daily level, with whole families being butchered and churches destroyed with the aiding and abetting of the government in Nigeria,” according to Dr Michael Kinsella, National Director of ACN Ireland.

At 7 p.m. the book will be launched and a Q&A held with Dr Michael Kinsella and Sister Elisa from the Sisters of Our Lady of Guadalupe, who received enormous help in the rebuilding of their convents and schools after they were destroyed by Islamic militants in Sierra Leone. “Everybody is welcome. Everybody will have an opportunity to have a direct encounter with witnesses – that is, people who have directly experienced violence in defending their faith – and that’s a rare opportunity for people in Ireland,” said Dr Kinsella.

The decision to edit and launch Our Martyrs, Dr Kinsella shared, was one “born of a genetic memory within each and every Irish person, conscious or unconscious, of the fact that the foundations of our faith and how it was sustained for centuries was through the most adverse and difficult of times. It was essentially a capital crime to be Catholic in Ireland – the practice of one’s faith, attending Mass, attending to any of the sacraments, being a priest – was something that could lead to, and overwhelmingly did lead to, imprisonment, torture and death.”

Dr Kinsella also mentioned the white martyrdom in Ireland today, which he describes as a “cultural cleansing of Catholicism from Ireland and Irish public life”. He believes that the wider Irish faithful can gain a greater appreciation for their faith if they are aware of the sacrifices that have gone into maintaining the faith that they have today. “A book like Our Martyrs is a rather sanguinary vignette of the sufferings that generations of Irish people went through in order to practise and live their faith and pass it on to their children,” Dr Kinsella said.

While Our Martyrs dips into academic territory, Dr Kinsella urges that the book, which deals with the universal call for the world to pick up the cross and follow Jesus, is a book for everyone to read. “Back then illiteracy rates were high, poverty rates were high, persecution was high, yet the faith survived and thrived under the most adverse of conditions. Now in Ireland our literacy rates are very high, our living conditions are far better, our freedom to believe and reject belief is there. But what is missing now is an understanding that if you make compromises with what Christ taught, inevitably when it comes to the crunch you will be unable to gather the courage to defend it.”

With ACN’s first ever Week of Witness wrapping up this Sunday 1 December, Dr Kinsella reflects on how it has been going: “The response from the faithful has been very generous and the response from the bishops has broadly been very supportive as well. There are a lot of seeds being planted so hopefully it will yield a rich harvest for the suffering and persecuted Church over the coming months and years ahead.”

This story is written and edited by ACN Ireland – www.acnireland.org.