Amazonia: Dorothy Stang’s Struggle tells the story of US-born Dorothy Stang (1931-2005), who joined the Sisters of Notre Dame de Namur and then lived Laudato Si long before it was written.

With every breath, Sr Stang made the protection of the poor and respect for creation her life’s mission – and she did it in one of the most essential, most threatened, and most coveted ecosystems on Earth.

As a result of her support for the indigenous peoples of the Amazon – and of the environment in which they lived – she was assassinated in February of 2005 by the hired gunmen of prominent landowners whose abuses Sr Stang had denounced again and again.

“We made this film in the spirit of Pope Francis’s encyclical Laudato Si,” Fr Gabriel Roussineau, Net for God’s Director, told Catholic Ecology.

“We wanted to demonstrate an authentic witness to the commitment to ‘integral ecology’ advocated by Pope Francis. Sr Dorothy Stang’s life continues to bear fruit today, inspiring many local initiatives for the protection of biodiversity.”

Fr Roussineau said that he hopes the 30-minute film will increase awareness of Sr Stang’s life and mission, especially in Europe, where she is less known than in the Americas.

“Our hope is that others can follow her example in their own countries. We hope her life inspires Christians to further engage in the defence of the environment, ecology, justice and the most poor.”

An interview with Sr Stang filmed not long before her death helps this contemporary documentary teach us with her own words, about her faith and the trials of the poor that she loved so much.

To build on this footage, filmmakers travelled to Anapu, in the Brazilian state of Pará, to meet those who knew Sr Stang. 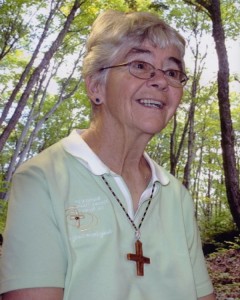 This includes those in her religious congregation, the Sisters of Notre Dame de Namur, as well as locals who have implemented sustainable development programs that Sr Dorothy began, and have thrived doing so.

We also hear from Bishop Emeritus Erwin Kräutler, who tells of how a young Sr Stang came to him and asked to work with the poorest of the poor.

When his warnings about the conditions she would face did not dissuade her, he sent the nun to the areas and the people of the Amazon that she would serve until her execution.

Bishop Kräutler, who himself served the people of the Amazon for almost four decades, contributed two important paragraphs to Laudato Si.

In the documentary, he offers similarly pointed lessons from Sr Stang’s life – words of challenge for Catholics everywhere.

All in all, this documentary is the perfect addition to any presentation or group reading of Laudato Si.

In just under thirty minutes it brings to life about every issue raised by Pope Francis’s eco-encyclical, all because of the work and love of one amazing woman.

Amazonia: Dorothy Stang’s Struggle is available in multiple languages and can be purchased at the Chemin Neuf Community website here: http://www.laboutique-chemin-neuf.com/en/dvd/1621-amazonia-dorothy-stangs-struggle-3700226530646.html