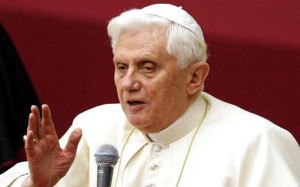 The Vatican has confirmed that almost 400 priests were defrocked by Pope Benedict over a two year period (2011-2012) for the sexual abuse of children.

The figures were revealed in a document obtained by the Associated Press on Friday.

According to the National Catholic Reporter, a Vatican spokesman confirmed the AP story.

The document, covering the years 2011 and 2012, is the first Vatican record of the number of priests disciplined over allegations of sexual abuse.

Under Pope Benedict XVI, the Vatican stepped up efforts to remove clerical abusers from the priesthood.

The document obtained by AP was prepared for the Implementation Committee of the Convention on the Rights of the Child.

Bishop Charles Scicluna of Malta, who served for 10 years as the Vatican’s prosecutor on abuse cases, was part of the Holy See’s delegation at the hearing of the UN’s Committee of the Rights of the Child on Thursday.

He told NCR that in 2011 and 2012, 384 priests were either voluntarily dismissed from the clerical state or had laicisation imposed as a penalty in cases related to sexual abuse.

The statistics for 2011 and 2012, show a significant increase on the number of priests defrocked in those years compared with 2008 and 2009, when 170 priests were removed.

Figures before these years remain hazy as the Vatican revealed only the number of alleged cases of sexual abuse it had received.

Meanwhile, at a Mass concelebrated with two cardinals on Thursday, Pope Francis denounced the harm caused by the clerical scandals.

In his homily, the Pontiff spoke of the “shame of the Church” over those scandals.

Regarding the people of God, Pope Francis reflected on the harm that the scandals have caused them.