Eighth Amendment is a beacon of hope thirty-four years on 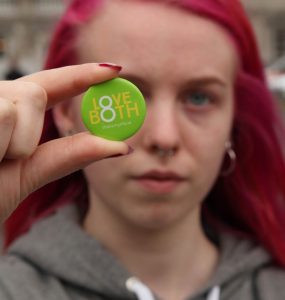 Marking 34 years of the Eighth Amendment. Pic by John McElroy

“Without question, the Eighth Amendment has saved countless lives,” said Cora Sherlock from the Pro Life Campaign at an awareness event yesterday marking the 34th anniversary of the passage of the Eighth Amendment. “Repealing or replacing it would inevitably cost lives. That’s the reality behind the rhetoric of ‘choice’ currently dominating the debate on the issue.”

Ms Sherlock said the number of people alive today thanks to the Eighth Amendment is something that receives far too little attention. “According to an independently produced actuarial report last year, there are, at a conservative estimate, 100,000 people alive today in Ireland as a direct result of the Eighth Amendment. That’s an amazing thing that deserves to be front and centre in the current debate on abortion.”

The Pro Life Campaign spokesperson pointed out that just a month ago, the Advertising Standards Authority (ASA) in Northern Ireland validated similar claims that tens of thousands of lives had been saved there from abortion as a direct result of not extending the 1967 abortion law to Northern Ireland.

“Many people involved in the pro-life movement today openly say they owe the life of their child to the Eighth Amendment. Having to travel to England meant a few extra days planning and gave them the time to think things through a bit more and decide against abortion. Today, they cannot believe they ever entertained the idea of ending the life of the son or daughter who now means the world to them.”

The Eighth Amendment to the Constitution does not deserve “the criticism and ridicule” it receives in certain quarters, she continued. “It has served as a beacon of hope at a time when other countries legalised wide-ranging abortion. Ireland has shown it’s possible to prohibit abortion and still be a world leader in protecting the lives of pregnant women.”

Ms Sherlock concluded that no country was perfect, but that Ireland had reason to be proud of its pro-life laws. “As a society, instead of dismantling the Eighth Amendment, we should be pooling our energies and working together to create a more welcoming, life-affirming environment for expectant mothers and their unborn babies.”