Just 20% of couples do pre marriage course in Ferns 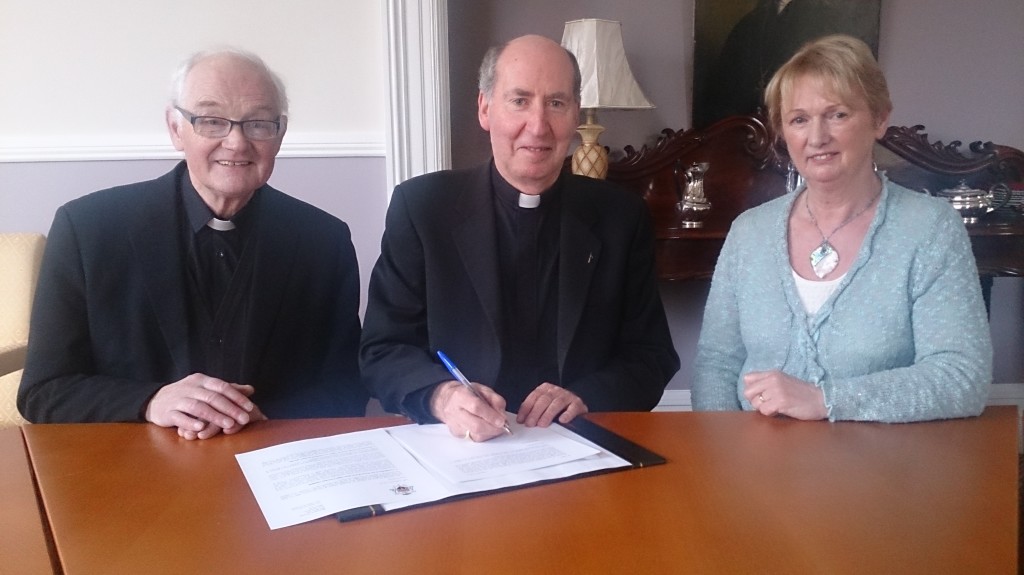 Bishop Denis Brennan signs letter to the priests of the Diocese of Ferns with Accord Chaplain Fr. Bill Cosgrave and Family Life Services co-ordinator Maria Kennedy.

Priests in the diocese of Ferns have been told by their bishop to promote ACCORD’s pre marriage course among couples preparing to marry.

Bishop Denis Brennan has written to his clergy highlighting his concern over the small percentage of couples marrying in a catholic church who participate in these preparation courses.

In his letter, Bishop Brennan also updates the priests on the latest figures for the number of couples who took an ACCORD course.

The figures show that just over 20% of couples who married in the diocese’s catholic churches in 2012 did the course.

“This, you will agree, is unacceptably low, especially in view of the fundamental importance we all attach to marriage for our church community and for the welfare of our society,” Bishop Brennan states in his letter.

He also expressed concern that only about 11% – 15% of catholic couples who married in the diocese over 2010/11 had done an ACCORD course, which he described as “very disappointing”.

The most recent figure is down from 2008, when 602 catholic marriages took place in Ferns of whom 193 couples did an Accord pre-marriage course or 32%.

Although 2012 saw an increase, 464 catholic marriages of whom 96 couples did a pre-marriage course or 20.7%, it was insufficient to allay the Bishop’s concerns.

Taking part in a pre marriage course is “not legally obligatory” in Ferns, Bishop Brennan recognised but he told his priests that they were “very well placed to impress on these young couples the value and benefits of doing an ACCORD PMC.”

The diocese currently has only three volunteers to host pre-marriage courses, which are held six or seven times a year and more facilitators are needed to present the courses Bishop Brennan admitted.

The revelation by Bishop Brennan comes a week after ACCORD’s national office released its latest figures.

These showed that demand for pre marriage courses and counselling from couples experiencing difficulties in their marriage rose nationally last year for the fourth consecutive year.