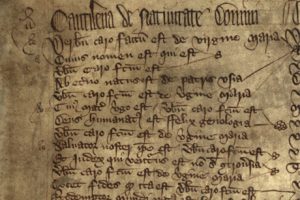 Christmas songs written by the 14th Century Church of Ireland Bishop of Ossory, Richard Ledred, are among items from his Red Book of Ossory which have been made available online.

The 25 songs related to the Nativity of our Lord are part of the medieval episcopal register of Richard Ledred which has been digitised. The 79 vellum leaves are bound in red leather, giving the book its name the Red Book of Ossory. It is considered to be one of the most significant medieval manuscripts in the archives of the Church of Ireland’s Representative Church Body (RCB) and executive trustees of the province.

“Like other medieval episcopal registers, it contains a wide range of documents that defy classification, the choice of which depended on what was important to individual bishops, in this case by Ledred,” the Church of Ireland said.

Dr Adrian Empey, a member of the Church’s Library and Archives Committee, said that Ledred was “one of the most extraordinary bishops ever to occupy the see of Ossory. It is a great delight that the Library has seen fit to make available not just these songs but all of the other unique content of the Red Book of Ossory in digital format for a worldwide audience to view.”

Richard Ledred, also known as Richard de Ledrede, was Bishop of Ossory from 1317 until his death in 1360 or 1361. This book contains the lyrics of nativity songs written by Bishop Ledred as well as later entries from the time of Elizabeth I.

The volume is internationally renowned as it contains numerous documents of legal interest, such as some of the provisions of Magna Carta. Some would say even more importantly is a medical text on aqua vitae, or cognac as it is called nowadays. The three and a half page Latin recipe is the earliest known and published in a manuscript. Its medicinal qualities were possibly valued at a time when the Black Death ravaged Kilkenny in 1348. 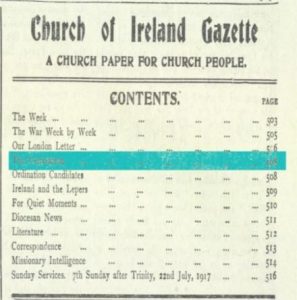 The Diocese of Ossory is one of the oldest in Ireland, established when the Church of Ireland moved from a monastic model to one based on dioceses and parishes. At the Reformation, parallel Anglican and Roman Catholic sees existed; the Catholic Diocese of Ossory continues to this day.

One project -the Anglican Record Project, which is the work of Mark Williams, is an ongoing endeavour to make the registers of baptism, marriage and burial from Church of Ireland parishes available in a digital format. The online version is hosted by the Representative Church Body Library, which will periodically introduce new transcripts of parish registers.

More information can be found at www.ireland.anglican.org/library/archive.