Home > Featured > Over 1,000 Christians rally against US Black Mass

Over 1,000 Christians rally against US Black Mass 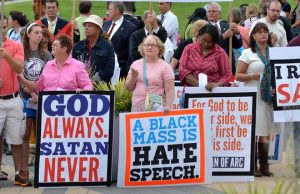 More than 1,000 Christians representing a number of different traditions attended a prayer rally on Monday in Oklahoma City to counter a black mass which was conducted at the city’s civic centre.

The satanic ceremony was organised to coincide with the Feast of the Assumption, and organisers of the bizarre event let it be known that they had chosen the date specifically to mock the Virgin Mary.

Addressing those who attended the Christian prayer rally, Fr William Novak, vicar general of Oklahoma archdiocese, said they were there as brothers and sisters unified in peace and in prayer and “to stand against evil.”

The ecumenical Unity Prayer Walk saw more than 1,000 people pray and sing as they walked from the ‘Jesus Wept’ statue in the city to the First United Methodist Church of Oklahoma City.

The walk and a Unity Prayer Service at the church were held in response to the Dakhma of Angra Mainyu’s black mass in the City Space Theater at the Civic Center Music Hall.

Participants said they walked to publicly acknowledge their faith and to show that God overcomes evil with His love.

At one point, the leaders sang ‘Amazing Grace.’ Others prayed the rosary, while another group sang ‘Victory in Jesus’, others still prayed the Lord’s Prayer as they walked.

“Lord, we pray for the leaders of our government because they bear a heavy responsibility to manage the common good of our people. And we confess that many times we are a nation and a state divided,” the Rev Emerson Falls, Native American Ministries specialist with the Baptist General Convention of Oklahoma, said during his prayer for government.

“We divide by red states versus blue states, ‘black lives matter’ versus ‘blue lives matter’, race, ethnicity and so many other things. Oh Lord, we ask that you grant our leaders wisdom from above to lead us.”

Members of First United Methodist Church of Oklahoma City, Marty and Penny Anderson, of Oklahoma City, said the rally was about “overpowering darkness with light, so anything they do over there, we’re going to overpower with goodness and love and Jesus.”