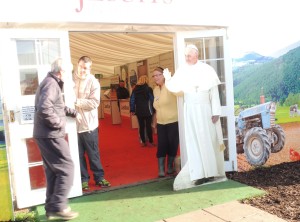 Life-size cardboard cut-out of Pope Francis at the Jesuit tent, attracted many for ‘selfies’.

Countless people sought a blessing with the crucifix used by Venerable John Sullivan at the recent National Ploughing Championship in Co Laois.

The Jesuit priest is on the path for sainthood and the crucifix which he used to bless all he met, and which is now in much demand at the monthly liturgies celebrating his life, was available to anyone who visited the Jesuits’ stand at the event which attracted an average 80,000 visitors daily.

Patrick Muldoon of the Jesuit Communications office gave the example of school children from Kilkenny who visited the stand.

“They came in for a blessing with the cross. It was really powerful to see that. They offered up their own prayers and it is a great witness to the faith, the openness of young people,” he said.

He is a young person himself who gave his own time to be on the stand during the middle of the week. He is also involved in Nightfever where young people invite their peers to visit a church in the city at night.

“Young people are searching, faith is very much relevant to them in my opinion. They may not be practising at mass or anything like that, but there is an openness there. You bring the joy of faith to them the fact that they are valued and God’s love is there for them,” he said. 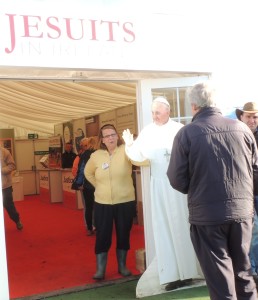 “A lot of people are unaware of what Jesuits are doing and I think it is important to be here and to witness to the faith and to be among all of the other many attractions that are here and to be there and to be present and to be with people,” he said.

He explained the crucifix was that of Fr Sullivan’s mother.

She was a catholic and her husband was a protestant.

Raised in his father’s faith, he became a barrister and it was not until he was in London that he became a Catholic and later he joined the Jesuits.

“His spirituality is in both traditions and appeals to both, as does his simplicity,” said Patrick Muldoon.

“His holiness is in the simple things and he used to go around visiting on his bike and bless people with the crucifix. So when he died there was a devotion to him.”

His crucifix is used today for the blessing of the sick in particular and people pray for special intentions through his intersession.

A blessing with the crucifix is available before and after the monthly Mass which takes place at Gardiner Street Church, Dublin, in thanksgiving for the life of Fr John Sullivan. 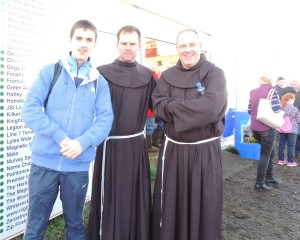 Matthew Roche from Co Galway, with Ronan Sharpley and Damian Casey of the Franciscan Friary Athlone

The Jesuits had on their stand some of the many ways that people can encounter God from spirituality, and a quiet space for prayer to justice and being of service in the world.

Copies of its publications Pioneer, Messenger An Timire (the Irish language equivalent of the Messenger) were available.

The Peter McVerry Trust was present and this well known charity for the homeless is spreading around Ireland and is now working in Kildare and Limerick.

Greg Merrin was there posing the question to young people what home means to them and how would they feel if they lost their home.

He highlighted the work young volunteers do and signed up new volunteers.

Fr Gerry O Hanlon SJ who works at the Jesuit Centre for Faith and Justice highlighted their work.

He also pointed out that the Jesuits are and seeking to recruit a young farmer willing to give a year to help run the Jesuit farm in Zambia, and another to help train farmers in the Philippines.

Other religious orders were also present such as the Sisters of St Joseph of Cluny and the Franciscans. Their friars from Athlone were outside inviting people in and answering questions and having their photos taken with some of the huge crowds present.