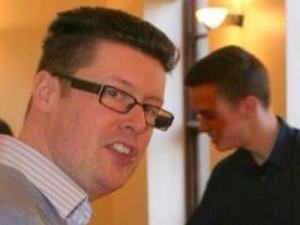 Revelation 14:13 “And I heard a voice from heaven saying, ‘Write this: Blessed are the dead who die in the Lord from now on.’ ‘Blessed indeed,’ says the Spirit, ‘that they may rest from their labours, for their deeds follow them!’”

Like everyone else, we the news team at www.CatholicIreland.net were deeply shocked to learn of the violent death of Tom O’Gorman in the early hours of Sunday morning.

Shocked because of the horrifyingly violent nature of Tom’s death which was so contrary to our gentleman colleague and friend.

Shocked because he was a young man with plenty of life ahead of him and plenty to offer the world and that was snatched brutally from him.

Shocked because he won’t be part of the world of Catholic journalism any more. It feels an emptier place for his absence.

Shocked because someone with whom we had regular interaction will no longer be bringing his formidable brain and intellectual acuity to the debate.

Tom was a gentleman. But he was also a great writer. His incisiveness meant that those who were inclined towards woolly-thinking put their arguments to him with a certain trepidation.

Tom was not afraid to challenge the consensus because Tom was both courageous and a seeker of the Truth.

A Catholic by conviction, he had thought about the issues and grappled with them in a way most Catholics never do.

As graduate of University College Dublin, his interests were history, politics and Classical civilisation. But his faith came first.

A conversation with Tom could go anywhere – he was always thinking and reading and some of us gained insights via the crumbs that fell from his intellectual table.

Memories of Tom are too many to enumerate, but I for one especially loved when a serious lecture was taking place, hosted by the Iona Institute, and something humorous might be said – Tom would throw back his head and laugh out loud. It always brought a smile to my face and others.

For us women, he was chivalrous. If he got wind that someone was giving you a tough time – particularly if it was a priest – he’d be on the phone giving you a pep talk and showing solidarity.

He was a good guy.

As a believer, he understood the dilemma of the Christian journalist and the temptation to throw the baby out with the bathwater when the chips were down.

The Focolare movement was a place where Tom found prayer and spirituality. I am sure Chiara Lubich was there for Tom in his last moments, offering him her warm embrace and bringing him on to the next stage of his journey – Rest safely now dear Tom, safe in the arms of Jesus.