Summary of St Peter is a very attractive figure since he shared our weakness, but after the resurrection he became the one to strengthen his brothers. 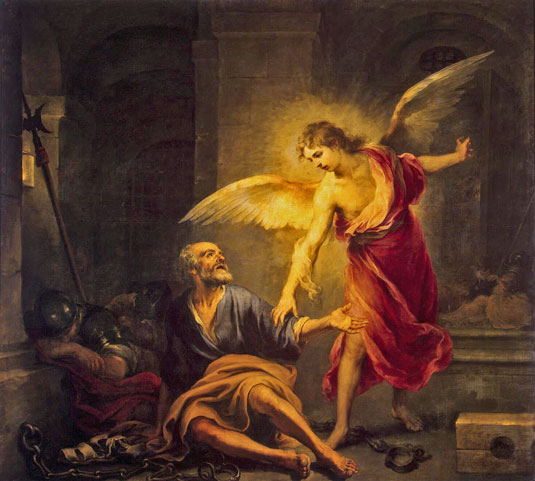 Tu es Petrus – ‘You are Peter and on this rock I will build my Church.’ The words in Latin stand five feet high in the lofty vaults of St Peter’s Basilica in Rome. The neck and eye must swivel almost vertically to pick out the scripture verses in golden lettering that speak about Peter’s role within the Church, ‘Feed my lambs, feed my sheep’ and about his humanity, ‘and when you have recovered you shall strengthen your brothers’ (Lk 22:32). Yesterday: Peter today Francis

Moved to tears
Twenty one years ago, at Galway, the hairs on my neck stood up and tears filled my eyes as ‘Peter’ (Pope John Paul II) came to Ireland’s shores for the first time in two thousand years. I’m sure I was not the only person so moved on that day. As the helicopter emerged from the early morning September mist we all could see a speck of white at a window above us. Peter’s 264th successor had come to our land. In the intervening years we have come to know better what sort of man this particular ‘Peter’ was. And now, John Paul II …..Francis….!

Saints and sinners
Who is ‘Peter’? Through the centuries the papacy has developed and changed. Sadly the post has been held by a few rogues, quite a few men who were more suited to the world of politics than the realm of the spirit, but also, thankfully, by many saints.

In the early formative years of the Church when other centres of faith occasionally fell into heresy, Rome and its bishop never did. Through two millennia that consistency has continued despite sometimes the behaviour of the see’s incumbent. The words of Jesus to Peter have indeed come true: ‘And when you have recovered you will strengthen your brothers’.

Peter is indeed the ‘rock’ on which the Church is built. Yet what is that rock except that profession of faith which each of us is called to make in Jesus, ‘You are the Christ, the Son of the living God.’ While the other disciples gave the opinions of others about the identity of Jesus, Peter stepped out in faith and proclaimed who Jesus was.

Best friend
One year Pope John Paul II, was visiting a parish in Rome as part of his duties as Bishop of that city.  After celebrating Mass with the parishioners he met with the youth of the parish in a time of dialogue and exchange. The young people had the opportunity to ask the Pope questions many of us would love to ask – about his growing up in Poland: Did he have a girlfriend? What football team he supported? And so on. One young man asked him: ‘Who is your best friend?’ Are we surprised that his answer was ‘Jesus Christ’? ‘

Quo vadis?
I began these thoughts with the Latin phrase Tu es Petrus. I will end with another, Quo vadis? (‘Where are you going?’).  The legend is that about 64 AD Peter was persuaded by the Christian community in Rome to flee the savage persecution unleashed by the mad Emperor, Nero. ‘It would not be good if our leaders were captured,’ they argued. On the road to Naples and the South, the famous Via Appia, a few miles south of the city Peter met a man. ‘Quo vadis?’ he asked him. ‘I am going to Rome to be crucified,’ was the reply. Peter knew it was the Lord and turned on his heel and walked back to the city to share the fate of his brothers and sisters.

But according to tradition and recent archaeological research, Peter, a victim too of Nero’s madness, rests beneath the high altar in the Basilica of St Peter which bears his name. 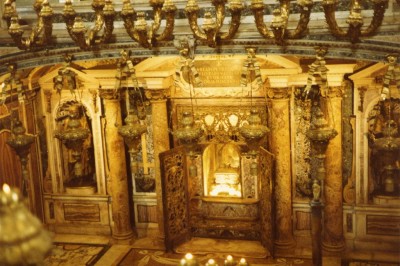 St Peter’s Tomb — the “rock”on which St Peters and the Vatican  is built .

This article first appeared in The Messenger (June 2000), a publication of the Irish Jesuits.