Aug 29 – The Passion of St John the Baptist

John the Baptist was a man of courage. This feast urges us to stand firm in our faith to the end and resist the temptation to compromise the gospel teaching.

Patrick Duffy gives some background to the feast.

At Sebaste, near modern-day Nablus
The tradition is that after his beheading the disciples of John the Baptist took his body and buried it at Sebaste (Samaria) near modern-day Nablus in the West Bank. His relics were certainly honoured there by the middle of the fourth century and although the tomb was desecrated by Julian the Apostate, it was restored and still even today is housed in the Nabi Yahya Mosque (“John the Baptist Mosque”) at that same place. Various relics of the head of John the Baptist are claimed at Rome and elsewhere, but there is little likelihood that any of them are authentic.

The feast
The feast commemorating the Beheading of St. John the Baptist is almost as old as that commemorating his Nativity: it is one of the oldest feasts introduced into both the Eastern and Western liturgies to honour a saint.

The context of the story: Herod’s guilt
The story of his beheading is told in Mark 6:14-29 in the context of Herod hearing about Jesus and the miraculous powers at work in him. Herod feared that this Jesus was John whom he had beheaded risen from the dead. 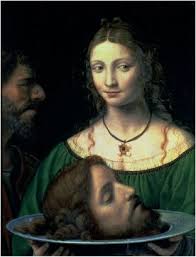 What happened
John had reproached King Herod saying it was against the Law for him to have taken his brother Philip’s wife, Herodias, in marriage. Herod arrested John and put him in prison. He who always lived in the sunny open air was now imprisoned in darkness.

On Herod’s birthday, Herodias’s daughter danced so beautifully before Herod and his guests that he promised her anything she asked. Prompted by her mother, she asked for the head of John the Baptist on a plate. Herod granted her wish and John was then beheaded. 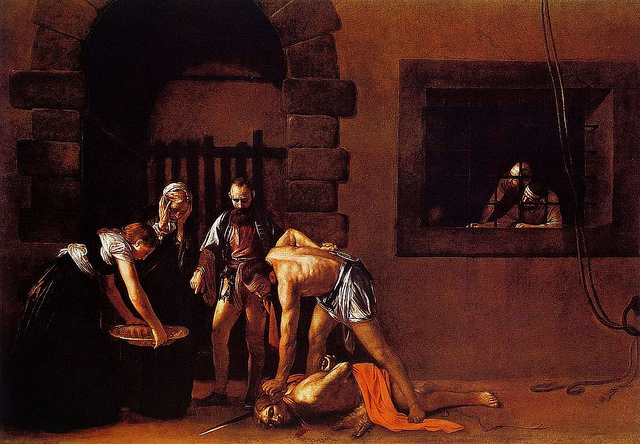 A famous painting of The Beheading of John the Baptist hangs in St John’s Co-Cathedral in Valetta. It is the only work (right)by Caravaggio to bear the artist’s signature, which he placed in red  lood spilling from the Baptist’s cut throat. Other paintings by Caravaggio on the theme include two entitled Salome with the Head of John the Baptist: one of these is in London’s National Gallery and the other in the Royal Palace of Madrid.