Summary: St Wenceslaus, Martyr. Born about 907 in Bohemia (Czech Republic); died there about 929. Raised a christian by his grandmother, ruled Bohemia with christian principles, worked for the education of his people, and sought harmony with neighbouring Germanic peoples. Opposition to these policies led to his murder at the hands of his brother’s followers. Honoured as the earliest Slav saint for his selflessness in promoting the Christian faith.

Patrick Duffy looks for some of the facts about the young king.

The outstanding memory of St Wenceslaus in culture is his unselfishness; A popular cult arose proclaiming the affable and learned prince Wenceslas as the perpetual spiritual ruler of all Czechs. He looked out for the poor man on the feast of Stephen!

In Czech, Svaty Vaclav, he was raised as a Christian by his grandmother, St Ludmilla, but his ambitious mother Dragomir, a pagan, had her murdered and acted herself as regent until Wenceslaus came of age in 924. Court intrigue and the desire of the people to put an end to conflict between Christian and non-Christian factions in Bohemia pushed him to taking the reins of government himself.

Assertively Christian
As duke of Bohemia, Wenceslaus was pious and encouraged German missionary priests in evengelising Bohemia. But he antagonised his non-Christian opponents. Faced with German invasions in 929, Wenceslaus submitted to the German king, Henry I the Fowler. 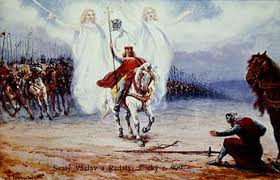 sassination
His submission provoked some of the nobles to conspire against him and they prompted his younger brother Boleslaus to murder him. Boleslaus invited Wencenslaus to a celebration of the feast of Saints Cosmas and Damian and as Wenceslaus was entering the church, Boleslaus struck him on the head with a sword. They struggled, and then friends of Boleslaus finished off the assassination. But frightened at the news of miracles occurring at Wenceslaus’s tomb, Boleslaus had his remains transferred to the Church of St Vitus in Prague. This became a great pilgrimage centre during the medieval period. By the year 984 the feast of St Wenceslaus was being observed. 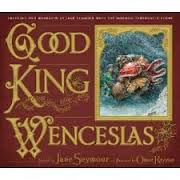 Influence
Immediately after his assassination, Wenceslaus was regarded as Bohemia’s patron saint. The 19th century Christmas carol, Good King Wenceslaus, sings his virtues of generosity to the poor. Written by J.M. Neale (d.1866), the incident it depicts is an imaginary one.

Along with St Stanislaus, he is co-patron of the Wavel Cathedral in Cracow.