Summary: St Walburga belonged to an extraordinary English family, five of whom are saints. She herself also became a missionary in Germany and even to the present day has a curious place in German folklore. 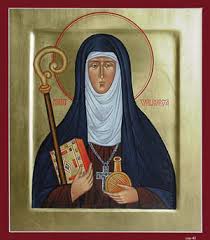 She was born in Wessex, England, about 710, the daughter of Richard, one of the under-kings of the West Saxons. When he was starting with his two sons on a pilgrimage to the Holy Land, he entrusted Walburga, then eleven years old, to the abbess Tatta of Wimborne. Richard died at Lucca, Italy, en route to the Holy Land on pilgrimage.

Her education
Walburga advanced in learning and holiness. Scarcely a year after her arrival, Walburga received news of her father’s death at Lucca. Her mother, Winna, was the sister of St Boniface who went as a missionary to Germany. She had two brothers, Willibald and Winnibald, who later joined their uncle Boniface as missionaries in Germany.

Her uncle a missionary in Germany
During this period her uncle, St. Boniface, had begun preaching the gospel in Germany. He saw that scattered efforts at preaching would exert only a passing influence. So he decided to bring the whole country under an organised system. As he moved along preaching the gospel, he established monasteries which, like fortresses, would hold the conquered regions, and from these watch-towers the light of faith and learning would radiate far and near.

Women help in evangelisation
Boniface was the first missionary to call women to his aid. In 748, in response to his appeal, Abbess Tetta of Wimbourne sent over Lioba and some other nuns help. Later, Walburga joined them at a convent at Tauberbischofsheim, on the River Tauber, 30 kms south-west of Würzburg. Here she spent two years and became skilled in medicine.

Willibald bishop of Eichstätt
One of Wallburga’s brothers, Willibald, had travelled to Jerusalem and in the Middle East, and then spent the ten years from 730 to 740 as a monk at Monte Cassino. Pope St Gregory II subsequently sent him to Germany to help his uncle St Boniface, who ordained him a priest, and appointed him bishop of Eichstätt.

With her brother Winnibald
Walburga’s other brother, Winnibald, had met up with his uncle Boniface in Rome. Boniface brought him to Germany, ordained him and gave him charge of churches near Erfurt. When Willibald became bishop of Eichstätt, he asked Winnibald to set up a double monastery (like Wimborne) at Heidenheim (70 kilometers east of Stuttgart). Winnibald, in turn, asked Walburga to come and be in charge of the nuns, while he was in charge of the monks. When Winnibald died, Willibald appointed Walburga to be in charge of both nuns and monks.

Her death and influence 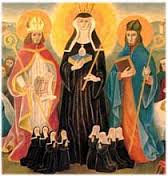 When Walburga died in 779, she was first buried at Heidenheim, but some time later her body was transferred to Eichstätt beside the body of her brother. From the rock around her tomb, an oil which had medicinal qualities, called “Walburga’s oil”, began to flow. A community was later founded to care for St Walburga’s grave and has continued down to today.

Walpurgisnacht
May 1 was the day her relics were translated to Eichstätt in 870. Because she was invoked as a protectress of crops and harvests, that day (the night of April 30 – May 1) became associated with the pagan feast of the approach of summer (much as St Brigid’s Day (1 February) is associated with the approach of spring in Ireland). It is was called Walpurgisnacht [Walburga’s Night]. Witches are said to run riot over the earth that night and bonfires are lit. It is still celebrated in Germany, Sweden and Finland.