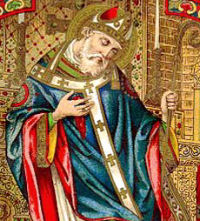 Summary ; The accepted tradition is that St Stanislaus of Krakow was martyred by King Boleslaus II and is the patron saint of Poland. Pope John Paul II even called him the patron saint of moral order. But a twenty-first century revisionist view would question this.

Patrick Duffy tells what is known of him.

Bishop of Cracow 1072
Stanislaus was born into a noble family at Szczepanow near Kracow, Poland. He was educated at Gniezno and possibly Liège before being ordained a priest and being made a canon at Cracow Cathedral.  He was appointed bishop of Kracow in 1072 and was a successful reformer of the clergy, a keen preacher and a generous patron of the city’s poor.

Quarrel with King Boleslaus
At first Stanislaus enjoyed the favour and support of the king, Boleslaus II, but soon they quarreled. The first quarrel with the king was was over a land dispute. The bishop had purchased a piece of land for the diocese on the banks of the Vistula River near Lublin from a certain Peter (Piotr), but after Piotr’s death his family claimed the land. The King ruled for the claimants, but – according to legend – Stanislaus resurrected Piotr so that he could confirm that he had sold the land to the Bishop.

Second quarrel
The more traditional account of the second quarrel, which was to lead to the bishop’s death, is that Stanislaus tried to get the king to reform his immoral behaviour (perhaps including the kidnapping of a nobleman’s beautiful wife) and stop the unjust ways he was treating his subjects. When the king ignored him, Stanislaus excommunicated him. 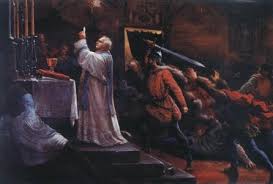 The king in his anger decided to do away with Stanislaus and ordered his guards to kill him as he took refuge in the chapel of St Michael outside the city. When the guards refused saying the bishop was protected by a heavenly light.

the king rushed in and killed him himself.

As a result the pope, Gregory VII, put the whole country under interdict until Boleslaus fell from power. In 1088 the saint’s relics were moved to the cathedral of Kracow, and his cult became strong in Poland and in neighbouring countries: he was canonised by Pope Innocent IV in 1253.

A revisionist view
A 20th history claims Stanislaus’s death was a political execution and not a martyrdom. It maintains that Stanislaus had been involved in a plot against the king. Whether Stanislaus should be regarded as a traitor or a hero remains one of the classic unresolved questions of Polish history.